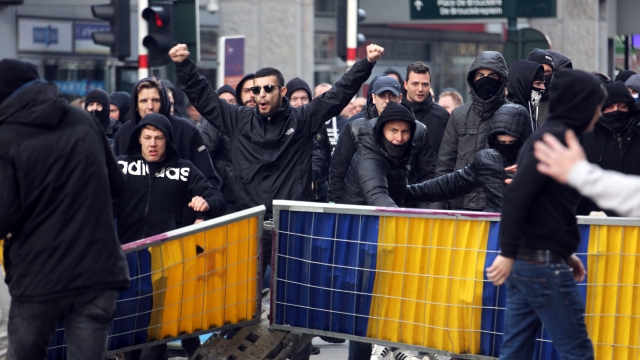 SMS
Brussels Protesters Another Example Of Europe's Far-Right Movement
By Ethan Weston
By Ethan Weston
March 27, 2016
A clash between mourners and protesters in Brussels is the most recent example of an increase in far-right political movements in Europe.
SHOW TRANSCRIPT

Early Sunday afternoon, protesters shouting anti-immigration slogans and raising their arms in Nazi salutes confronted a crowd that had gathered in Brussels to mourn the victims of Tuesday's terrorist attacks.

The mourners had gathered in the commercial district after a Sunday "march against fear" was postponed because authorities said police resources were already stretched thin.

When the protesters arrived, some of them lit firecrackers and chanted, "This is our home." Police used water cannons to try and move them away from where mourners had laid flowers and candles.

The protesters are reportedly from a right-wing group called "Nation," a self-described fascist group.

Far-right, anti-immigrant groups like Nation have been on the rise in Europe recently, with some forming into political parties that use the fear of terrorist attacks and the refugee crisis to bolster support.

After Tuesday's attacks, Marine Le Pen, the leader of France's far-right National Front Party, called for border closures and said, "We need to take seriously the criminal networks of Islamic fundamentalists that exist in our countries."

The leader of the far-right U.K. Independence Party Nigel Farage used the terrorist attacks as an example of why the European Union needs to end its open door policies.

"The point I'm making is that to open up the door to unlimited numbers of people, as Angela Merkel did last year, has brought thousands more potential terrorists into Europe," Farage said.

German political parties like Alternative for Germany have also seen increased membership as anti-immigrant sentiments in the country continue to grow and have won more votes than expected in this month's state elections.

This video includes images from Getty Images and clips from Radio Canada and UKIP MEPs.