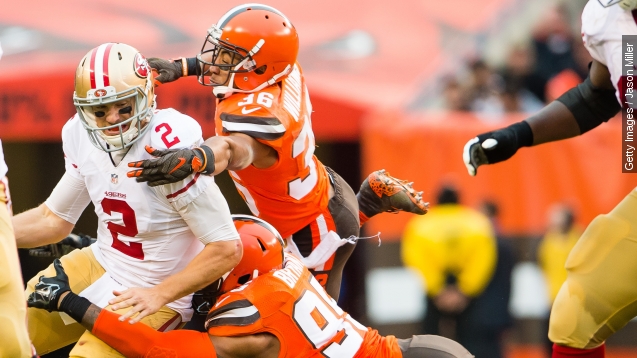 Outside linebacker Armonty Bryant will not be playing in Sunday's game against the Chiefs after he and practice squad player De'Ante Saunders were arrested. (Videos via Cleveland.com, YouTube / "The Bossman Show")

WOIO reports a gun and the prescription medication Adderall were found in the vehicle.

Saunders was arrested for operating a vehicle under the influence. It's still not clear why Bryant was arrested.

Ray Farmer, the Browns' general manager, acknowledged the situation in a statement Saturday and said he is taking the charges very seriously.

Bryant is second in sacks on the team with 5.5. This is the second time he's been arrested since being drafted by the Browns in 2013.