Brothers Locked In Apartment For 14 Years Tell Their Story 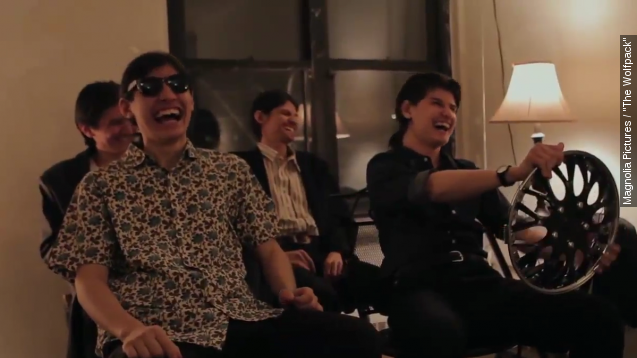 SMS
Brothers Locked In Apartment For 14 Years Tell Their Story
By Ryan Biek
By Ryan Biek
June 19, 2015
Six brothers who were locked in an apartment for 14 years, inspiring the documentary "The Wolfpack," are finally speaking out.
SHOW TRANSCRIPT

They're called the Wolfpack, the six Angulo brothers whose father locked them in a New York City apartment for 14 years. After becoming the subject of an award-winning documentary, they're finally speaking out.

"He would say to us: 'There's good people and there's bad people. I'd like to keep you all here and protected,'" Govinda Angulo told ABC.

Their father held the only key to their East Village apartment, which they were rarely allowed to leave. The brothers told ABC they were homeschooled by their mother, who was also locked in the apartment. Movies took on a special role, as they were the brothers' only glimpse of the outside world.

"The movies taught us sort of how to speak to one another," Mukunda Angulo told ABC.

The brothers say they've seen over 10,000 movies, highlighting films such as "The Dark Knight," "Reservoir Dogs" and "Pulp Fiction."

Their love of films led them to start re-enacting them word for word, complete with detailed costumes and plots, but all adapted to work in the apartment's setting. They'd even perform them like plays, in one long take.

One of the brothers, Mukunda, finally got the courage to break out of the apartment. His brothers soon followed suit, even leading their mother to push the balance of power more.

A chance encounter with filmmaker Crystal Moselle changed their lives. She was struck by their appearance and the fact she'd never seen them in the neighborhood. One of the brothers told Rolling Stone: "We didn't tell her much at first. We just said, 'We love movies — what do you do?'"

The brothers became the subject of Moselle's first documentary, and five years later, it's received the grand jury prize at Sundance.

A major theme of the piece is how the brothers took care of one another. A reviewer for The Boston Globe says, "The movie only looks like a coming-of-age freak show from the outside; in reality, it's unexpected proof that flowers can grow even in a prison."

Their father hasn't been charged with any crime, as the law does not require children be let out of the home. The family still lives together, but the brothers do not speak to him. Mukunda told The New York Times, "I want to move forward, and I don't want to move back."

At the same time, though, members of the family called their relationship with their father "evolving," and it seems they are working to forgive. The documentary opens nationwide Friday.