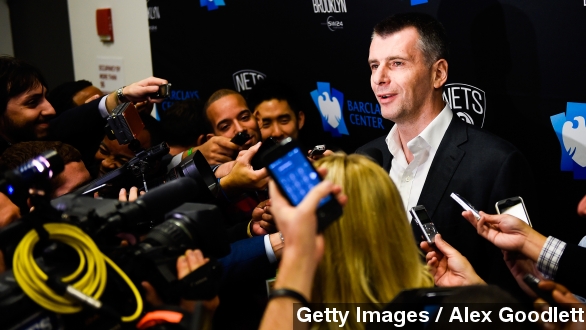 On the backs of Atlanta Hawks being put on the market in early January, Brooklyn Nets owner Mikhail Prokhorov is reportedly following suit.

According to ESPN, Prokhorov has hired investment advising firm Evercore Partners to help sell the franchise – which last year was worth about $780 million. (Video via CBS)

But that figure was calculated before the messy break-up and sale of the Los Angeles Clippers to former Microsoft CEO Steve Ballmer. (Video via TMZ)

Ballmer bought the Los Angeles Clippers for a record $2 billion, thus raising the value of all NBA teams — including the Brooklyn Nets. (Video via Fox Sports)

The NBA brought in a record 4.5 billion dollars in revenue after the 2012-2013 season and signed a $24 billion dollar media deal last October.

So with the value of NBA teams on the rise and and a shiny new stadium in Brooklyn why would the Russian billionaire be looking to sell?

Bloomberg reporter Scarlet Fu said, “One thing you should keep in mind is all this is the Russian ruble has lost half of its value against the USD over the past 12 months ... so this may be pressuring Prokhorov to consider a sale.”

On top of that, the Brooklyn Nets have done their best to bring in top talent through free agency rather than the draft, which has lead the franchise to have the highest payroll in the NBA.

Add that to the Nets ending the 2014 season $144 million dollars in the hole, according to a report from Grantland.

While the Brooklyn Nets have yet to comment a spokesperson for Prokhorov said in a statement, “Ownership is always open to listening to offers — that's just good business. … There is nothing imminent in terms of a sale of any stake in the team.”