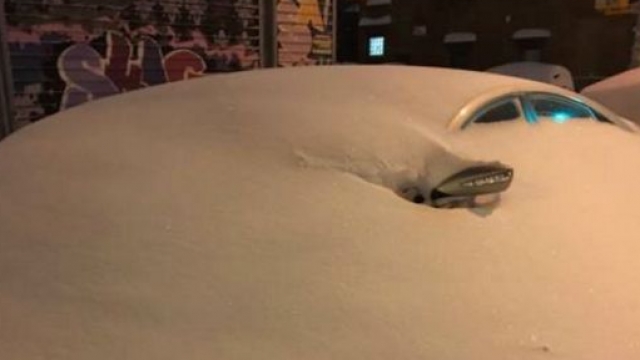 SMS
Brooklyn Man Tries Selling His Snowed-In Prius On Craigslist For $100
By Matt Moreno
By Matt Moreno
January 26, 2016
After Winter Storm Jonas pummeled the East Coast with 3 feet of snow, this man supposedly decided he'd rather sell the car than dig it out.
SHOW TRANSCRIPT

Shoveling snow from your driveway and cleaning off your car are two of the worst parts of winter — especially when you're dealing with 3 feet of the white stuff.

Winter Storm Jonas dropped up to 3 and a half feet of snow on some areas as it pummeled the East Coast over the weekend.

There was so much snow, it prompted one Brooklyn man to post his buried Toyota Prius for sale at a mere $100. The buyer only had to dig it out of the snow.

Max White said he had two options for his 2010 Prius hybrid with 45,000 miles: "It was either dig it out or walk to my friend's bar Tender Trap, start drinking and make a Craigslist ad," the post read.

The only thing is the picture White posted didn't look too much like a Prius. Oops.

OK, so it was probably a fake, but we can't blame him for trading his snowed-in car for a Benjamin.

White's ad has since been flagged on Craigslist, but we respect the effort.