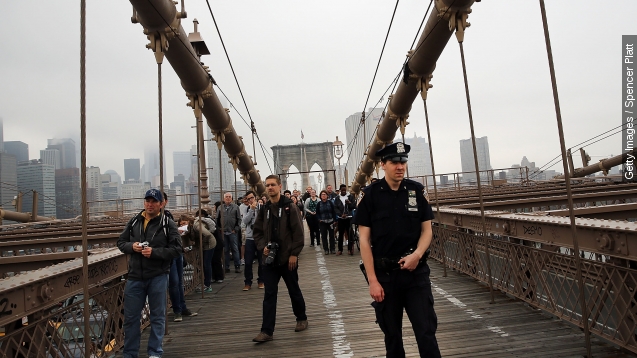 SMS
Brooklyn Bridge Selfie-Taker Arrested In Tennessee
By Matt Picht
By Matt Picht
August 17, 2015
David Karnauch was arrested on endangerment charges Monday, a month after he posed for a picture on top of the Brooklyn Bridge's railings.
SHOW TRANSCRIPT

A Tennessee man has been arrested after clambering up the Brooklyn Bridge to take a selfie.

David Karnauch of Chattanooga, 21, was arrested as a "fugitive from New York" on endangerment charges, over a month after he snapped a picture of himself on one of the railings. (Video via WNBC)

At the time, the image led to fears about the safety of the bridge, prompting NYPD official John Miller to play down security concerns.

"That particular spot on the bridge has nothing to do with the structural integrity of the bridge from a terrorism perspective," Miller said.

The selfie was the fourth such security breach on the bridge over the past 12 months. Several international tourists have climbed the bridge to take photos, and in July of last year the American flags decorating the bridge were infamously swapped out for bleached white flags. (Video via WPIX, WABC)