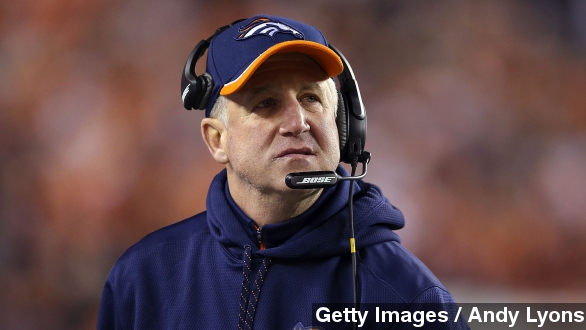 Well, that was quick. Denver Broncos head coach John Fox has parted ways with the team just one day after their playoff loss to the Indianapolis Colts.

After the game, Fox told KUSA, "When you sign up for this, that kind of stuff is always out there. I don't control that. We gave it our best effort, unfortunately came up a little short."

Fox, who's led the Broncos since 2011, characterized the decision to leave as mutual, and amicable. Broncos general manager John Elway said Fox "deserves a lot of credit for the Broncos’ turnaround," but said the decision was "in the best interest of our long-term goal, which from day one has been to win World Championships.

And sports reporters suspect the move wasn't as friendly as the Broncos are making it out to be.

ESPN's Chris Mortensen said, "I think they would have had to go win a Super Bowl for this change not to have been made. ... John Fox was, I'll go ahead and say this, fired."

And Fox Sports' Jay Glazer said, "John Elway looked at it as, 'This is all or nothing. With what we spent, you've got to go and win us a Super Bowl now or never.'"

The Broncos had a 46-18 regular-season record during Fox's four-year tenure as head coach and made it to the playoffs every year. But the team never managed to win the Super Bowl; and the one time they made it, last season, the Seattle Seahawks embarrassed the Broncos in a 43-8 blowout.

The move also increases the possibility quarterback Peyton Manning might choose to leave the Broncos. Manning's been facing questions about his future with the team following Sunday's loss and many sports analysts have questioned whether retirement is around the corner.

Following Monday's announcement, Elway informed the team's coaching staff they have permission to look elsewhere for a job after Fox departs. The new head coach will decide whether to keep the existing staff or hire some new faces.