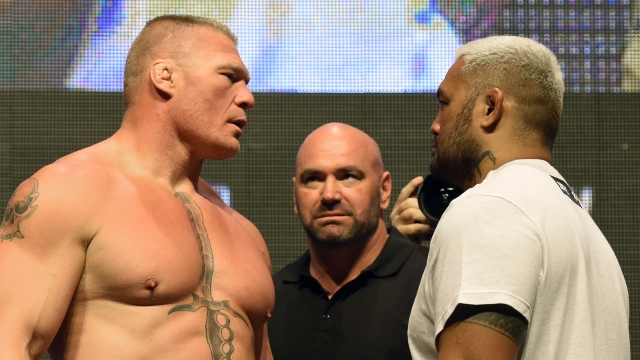 SMS
Brock Lesnar's Second Failed Drug Test Is A Huge Problem For The UFC
By Matt Moreno
By Matt Moreno
July 20, 2016
Lesnar's fight against Mark Hunt probably should've never happened. But it did, and now there are bigger issues.
SHOW TRANSCRIPT

"Let's make one thing clear: Brock Lesnar does what Brock Lesnar wants to do," Lesnar said after his fight against Mark Hunt.

What was supposed to be the biggest night in UFC history might've actually been the most disappointing night in the company's history.

UFC 200 made some noise by scheduling a title fight between Jon Jones and Daniel Cormier, and then following that up with a heavyweight bout between Brock Lesnar and Mark Hunt.

"This fight means a lot to him. The fight meant a lot to me, and the fight's not happening," Jones said during a press conference.

But Jones tested positive for a banned substance before his fight and was pulled from the card, giving way to Lesnar and Hunt to be the highlight of the night.

But it appears that fight shouldn't have happened, either. The U.S. Anti-Doping Agency says Lesnar tested positive twice for a banned substance, reportedly for the same substance Jones tested positive for.

Jones apparently "lost out on an eight-figure payday" due to his failed test, but Lesnar walked away with $2.5 million after beating Hunt.

Even if the UFC does try to reach into Lesnar's pockets for a refund — which would be easier said than done — the potential troubles don't stop there.

There have also been rumors of a fighters' union in the works, something the UFC has already tried to discourage. If it happens, though, it would be a major headache for the promotion.

Not that the UFC is crying over it too much, however. The company sold for $4 billion earlier this month, so if president Dana White is upset, he's likely using dollar bills as tissues.

SEE MORE: The UFC Sells Out For $4B, And That's A Big Deal

"I haven't cried like that since 'Titanic,'" Tallahassee (Woody Harrelson) says in the movie "Zombieland" as he wipes away his tears with money.

Lesnar's fight was his first in the UFC octagon in five years and his first under its anti-doping program.

This video includes clips from UFC, SB Nation and EA Sports, and images from Getty Images.