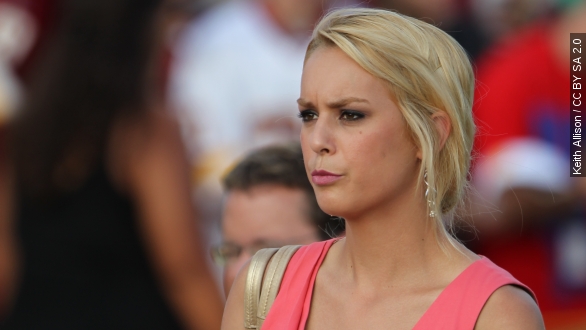 By now, sports fans have likely heard about if not seen the Britt McHenry video.

"So I could be a college dropout and do the same thing?" McHenry asked the employee. "Why? Because I have a brain and you don't?"

The ESPN reporter's low blow-filled tirade against a D.C.-area tow truck company employee already has her suspended from the network for a week. (Video via LiveLeak)

Now, many are pointing to ESPN's seemingly arbitrary distribution of discipline. The calls for McHenry to be fired were inevitable, but it's not like America's dominant sports network has never dealt with controversy related to on-air talent. (Video via ESPN)

After Bill Simmons' profane rant last fall about NFL commissioner Roger Goodell and a subsequent dare to his employers to suspend him, the network did just that for three weeks. Tony Kornheiser got a two-week suspension in 2010 for commenting about a female coworker's short skirt.

USA Today's Chris Chase called McHenry's suspension "an embarrassing slap on the wrist from a network that has been doling out recent suspensions like it's Roger Goodell on a power trip."

Now, that doesn't mean everybody's taking ESPN and McHenry to task, either.

If you've seen the video, you'll notice all the cuts jumping ahead in time meaning it was edited. We also don't know the context of what's happening off camera. (Video via LiveLeak)

While they're still easily in the minority, some people have come to McHenry's defense on social media and questioned the reputation of the towing company.

Since December, Advanced Towing has been profiled twice by WRC-TV. Once when a driver hooked a car with two children inside, unhooked the car when he spotted the kids, and the children's father says the driver then tried to drive away before he came back. Another driver towed away a car with a woman's dog inside.

While the company's apparent reputation might provide some context, it's still little more than distraction. McHenry's comments were almost entirely aimed at the tow truck employee, not the company.

The insults were also very personal — jabbing at the woman's education, job, teeth, weight and more. But already, there have been calls for fans to put the claws away.

Responding to a follower who pointed out insulting McHenry at this point is perpetuating the problem, Fox Sports' Katie Nolan agreed and wrote, "The girl knows she screwed up."