British Politics Are In Omnishambles After Brexit 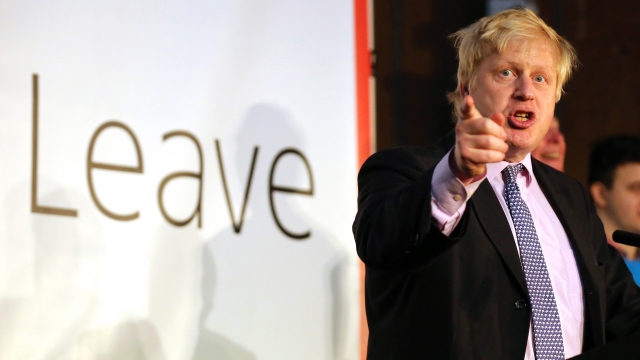 SMS
British Politics Are In Omnishambles After Brexit
By Kate Grumke
By Kate Grumke
June 30, 2016
The political upheaval may be entertaining from across the pond, but it's also a red flag of the fallout from the vote to leave the European Union.
SHOW TRANSCRIPT

British voters chose to leave the EU less than a week ago, and the country's politics are already a mess.

"The country requires fresh leadership to take it in this direction," Prime Minister David Cameron said.

After Cameron announced his resignation, two of the most likely candidates to replace him were former London Mayor Boris Johnson and interior minister Theresa May.

But then, Johnson's political ally Michael Gove said he was running.

In a statement, Gove said, "I have come, reluctantly, to the conclusion that Boris cannot provide the leadership or build the team for the task ahead."

That was pretty much a publicly humiliating stab in the back for Johnson.

Just a couple hours later, Johnson announced he was dropping out of the race.

"I have concluded that person cannot be me," Johnson said.

And the Brexit political mess isn't just on the conservative side. The Labour Party has had some pretty unprecedented turbulence, too.

Not only did Labour leader Jeremy Corbyn lose 13 members of his shadow cabinet, but he also lost a no-confidence vote. People are calling for his resignation.

The conservatives should announce a new prime minister in September.