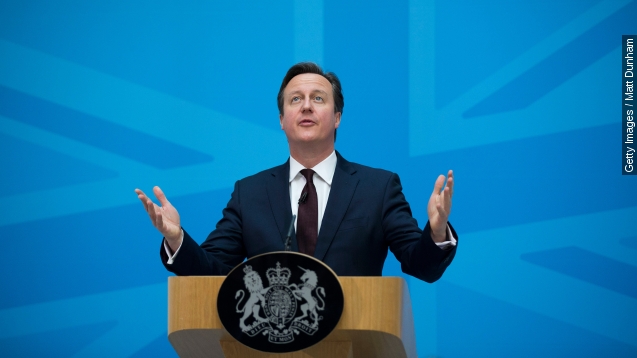 If you're a newly re-elected British prime minister who is at a summit hoping to get other European Union leaders to agree on reforms, this probably isn't the takeaway you want from initial impressions. (Video via European Union)

"I'm not going to say I was met with a wall of love when I arrived," British Prime Minister David Cameron said.

One major issue at hand is immigration. British PM David Cameron announced Thursday he's proposing new rules to stem the rise of immigrants in the UK.

"A strong country isn't one that pulls up the drawbridge. It is one that properly controls immigration. That's what people of all backgrounds voted for," Cameron said.

Immigration was a major issue leading up to this year's U.K. general election and Cameron believes reform is needed to allay national fears that the influx of migrants is hurting Britain's economy and putting a strain on public services.

Cameron's announcement was timely, coming after the release of a report from Britain's Office of National Statistics which says the country's net migration — the difference of people coming into and leaving the country — rose to more than 300,000 in 2014. That's not good news for a political leader who's party pledged to curb the growth of immigrants to 100,000 back in 2010.

Cameron called those numbers "disappointing," which could have spurred the announcement of a stricter immigration plan. Influence from the far-right could've also played a role. That can partly be attributed to the UK Independence Party, or Ukip, and its anti-immigration stance. Ukip won nearly 4 million votes in the UK general election — third behind the Conservative and Labour parties. (Video via UK Independence Party)

"Now, it is about letting any migrants who want to try the adventure of living and working in Britain for a period of time to know that they're going to have a very tough time," said Don Flynn, director of the Migrants Rights Network.

Cameron is going to face some obstacles in implementing his plan, though. The European Union allows for what's called freedom of movement within member states. For Cameron to make policy changes for migrants, he would have to negotiate those changes with other EU members...

...like German Chancellor Angela Merkel, who said earlier this year she's willing to work with Britain on the issue of immigration but the EU's freedom of movement policy is non-negotiable. (Video via Channel 4)

But if Cameron and EU leaders can't find common ground on an issue like immigration, then Britain's divorce from the EU could be all the more likely — and that's something EU leaders don't want.

Cameron has promised to renegotiate the terms of Britain's ties with the EU and hold a nationwide referendum before the end of 2017 so British voters can decide whether they want to stay in the EU or leave.

Although this is the first time Cameron is meeting with EU leaders since his re-election, this isn't his last chance to sell his plans for reform. The BBC reports Cameron plans to push for reforms at every summit, like the one this weekend, in the months ahead.