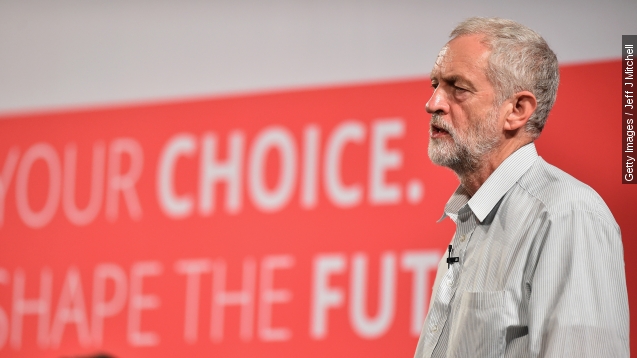 SMS
Britain's Version Of Bernie Sanders Polls Like Donald Trump
By Matt Picht
By Matt Picht
August 18, 2015
Left-wing MP Jeremy Corbyn's campaign to run the Labour Party has surged in the polls, and it's sending party leaders into a panic.
SHOW TRANSCRIPT

The ballots are out, and supporters of the U.K.'s Labour party now have about a month to decide their party's new leader.

And several Labour higher-ups are telling voters the same thing: Do not vote for this man.

"If Jeremy Corbyn were to become leader, the prospects of gaining power recede into the distance," former Lord Chancellor Jack Straw told Channel 4.

"When people say, 'Well, my heart says I should really be with that politics.' Well, get a transplant, because that's just dumb," former prime minister Tony Blair said.

In just a few short months, Jeremy Corbyn has gone from the back benches of Parliament to the frontrunner in the Labour leadership race, and he's giving mainstream Labour icons a massive headache.

There are currently four candidates in the running to be Labour's next leader: Andy Burnham, Liz Kendall, Yvette Cooper and Jeremy Corbyn.

Whoever wins can look forward to five years of impotently shouting at David Cameron, followed by a chance to run for Prime Minister.

Previous leader Ed Miliband’s efforts to pull Labour to the left ended in an electoral rout this May.

In response, three of his potential successors are arguing Labour needs to head back to the political center to regain support.

And then there's Corbyn.

"There are many things in our welfare state that we owe to the whole ideas of socialism," Corbyn said at an Oxford Union event.

An avowed socialist and long-serving lawmaker, Corbyn was nominated to represent his party’s far left and has shot up in the polls thanks to a swell of grassroots support. Sound familiar? (Video via RT)

Corbyn’s politics swing even further to the left than Bernie Sanders. His popular pledges to cut austerity and protect welfare are coupled with plans to nationalize energy and rail companies and scrap the U.K.'s Trident nuclear defense program.

But in terms of influence, Corbyn might be closer to Donald Trump: He's attracted overwhelming support from the party's ideological base that probably won't translate well in a general election.

Several polls put Corbyn's chances of winning the leadership election well above the other three candidates, but he's also rated the least likely to lead Labour to victory in the next election by voters.

Still, pulling Labour to the far left might be a good way for the party to win back some of the support from Scottish voters, who fled Labour en masse for the left-leaning Scottish National Party during the last election.

And Corbyn's candidacy seems to have breathed life into the Labour leadership campaign; an estimated 610,000 people have registered to vote in this election, compared with the 200,000 formal Labour members that were registered in May.

Voting for Labour's new leader ends September 10, and the winning candidate will be announced during a party conference on the 12th.