Bridesmaid Passes Out As Bride And Groom Kiss 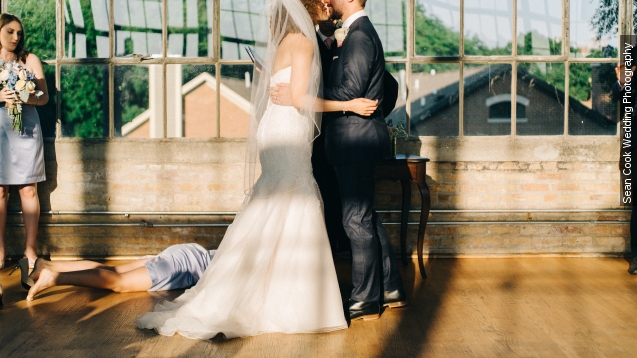 Ah. Photos of a smiling bride and an adoring groom. Those are the wedding photos you'd expect to see.

But a photo of a bridesmaid passed out ... that's a new one.

The weather may have been partially to blame for the bridesmaid's collapse. According to The Weather Channel, it was 86 degrees that day.

Kevin told Newsy the bridesmaid, who is his little sister, was dehydrated. She was doing just fine five minutes later.

And since we know the bridesmaid is OK, we're giving ourselves permission to smile at this photo from Sean Cook Wedding Photography.

Let's look at that bridesmaid on the left. What is she thinking? She doesn't look terribly shocked, but we imagine she's muttering something like, "Oh, (expletive)."

Kevin wrote on Instagram the picture was snapped at the perfect time. Right as he was leaning in to kiss his bride, they heard "a calamitous thud." He said the photo was taken before anyone could react.

And now the newlyweds have a good wedding story to tell, too.

This video includes images from Sean Cook Wedding Photography and music from Kevin MacLeod / CC BY 3.0.