Brian Williams Is Under New Scrutiny For Katrina Reporting 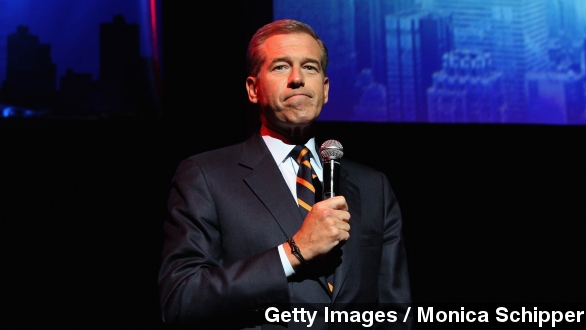 SMS
Brian Williams Is Under New Scrutiny For Katrina Reporting
By Ben Levin
By Ben Levin
February 6, 2015
Less than a week after apologizing for his false Iraq story, Brian Williams is facing new scrutiny for a story about Hurricane Katrina.
SHOW TRANSCRIPT

So, you've heard about this by now — Brian Williams apparently fabricated this story. (Video via CBS / "Late Show With David Letterman")

"Two of our four helicopters were hit by ground-fire, including the one I was in," he said.

Williams has said several times over the years that he was in a helicopter shot down by an RPG in the Iraq War — and was forced to apologize for his tale.

"I want to apologize. I said I was traveling in an aircraft that was hit by RPG fire; I was instead in a following aircraft," he said on NBC.

The revelation has put the once-trusted anchor under immense pressure from both other journalists and the American public.

"So he's not sorry for what he's done. He's just trying to protect himself. He should be fired."

Cue the cross-examination. Now it seems Wiliams' entire body of work will be pored over.

And one tale in particular is starting to stick out: When Williams was in New Orleans for Hurricane Katrina, he allegedly saw some pretty shocking stuff. (Video via Columbia Journalism Review)

"When you look out of your hotel room in the French Quarter and watch a man float by facedown," he said in an interview.

The problem is this: Though the French Quarter was hit by Hurricane Katrina, it didn't flood — so how did a body float down its streets?

The seeming contradiction has led to intense media scrutiny, with New York Magazine speculating that Williams once again exaggerated facts to bolster his personal mythology.

But there is another explanation: The New Orleans Advocate reports that Williams stayed at the Ritz-Carlton in New Orleans, which is close to the French Quarter and did see flooding in the storm.

Basically, it's plausible Williams was only mistaken about his location and not the actual presence of a body. The New York Times reports that floating bodies were a common sight in the days after Katrina.

NBC is staying quiet on whether Williams will face any disciplinary action, but Breitbart and New York Daily News are both reporting the network has launched an internal investigation.

USA Today points out that the network has a dilemma: Although it needs an anchor people can trust, Williams is a big brand and brings in big ratings.

The outlet argues that's both hurt and helped him: Maybe a need to be a brand spurred Williams to tell this story. It was captivating. And maybe now being that brand will save him at a time when the popularity — and moral authority — of nightly news shows is on the decline.