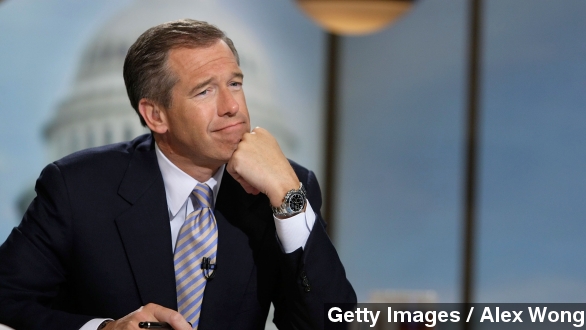 SMS
Brian Williams Apologizes For False Iraq War Story
By Zach Toombs
By Zach Toombs
February 4, 2015
For years, the NBC Nightly News anchor has said he was shot down in an Army helicopter in the Iraq War's early days. On Wednesday, he backtracked.
SHOW TRANSCRIPT

"I want to apologize. I said I was traveling in an aircraft that was hit by RPG fire. I was instead in a following aircraft ... This was a bungled attempt by me, to thank one special veteran," NBC's Brian Williams said.

One of America's best-known newsmen has been caught in a high-profile falsehood. Brian Williams apologized in Wednesday's newscast. Here's the segment from last Friday that got him in trouble.

“The story actually started with a terrible moment a dozen years back during the invasion of Iraq when the helicopter we were traveling in was forced down after being hit by an RPG,” Williams said.

The military newspaper Stars and Stripes was the first to report the story Wednesday, quoting a former U.S. Army flight engineer who said, "Williams and his camera crew were actually aboard a Chinook in a formation that was about an hour behind the three helicopters that came under fire."

Williams is blaming the whole thing on a foggy memory, saying in a written apology Wednesday that, in the 12 years since, his memory of the event had evolved.

It's true that NBC archives show Williams' original report noted it was the lead helicopter, not his chopper, that was hit by an RPG.

But by March 2013, Williams was recounting a different version of the story in some vivid detail to David Letterman.

"Two of our four helicopters were hit, by ground fire, including the one I was in — RPG and AK-47," Williams said.

"What happens the minute you realize you've been hit?" Letterman asked.

"We figure out how to land safely, and we did," Williams said.

Williams said Wednesday he never would've intentionally made this mistake and promised "no one is trying to steal anyone's valor."