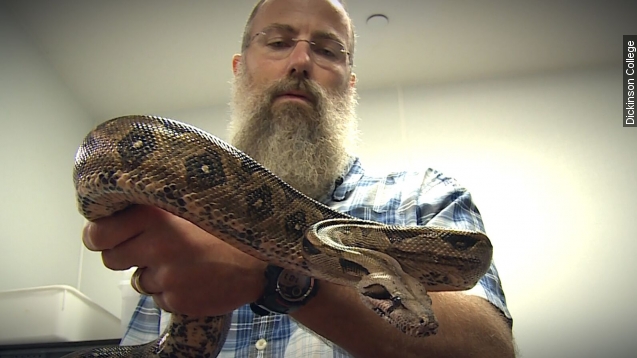 For years, scientists thought when boa constrictors wrap tightly around their prey, they were suffocating their dinner.

But it turns out that theory was probably wrong.

Researchers from Dickinson College wanted to find out what's really happening when boa constrictors kill their food. They discovered the snake is actually cutting off the animal's blood, not its air.

National Geographic explains: "Once blood flow ceases, organs with high metabolic rates — such as the brain, the liver, and the heart itself — begin to shut down. Doctors call this ischemia. Snakes call it lunch."

"And we believe that that's a valuable piece of information, something that's interesting to know just in general how snakes function but also specifically to understand how those snakes evolved, how they came about, why they became so successful, why there are so many species to day," said lead researcher Scott Boback, associate professor of biology at Dickinson College.

In 2012, Dickinson researchers also discovered how long the snakes squeeze is based on the victim's heartbeat.

The study involved putting the rats to sleep and measuring their blood pressure as the constrictor squeezed them. The rats died, but the Institutional Animal Care and Use Committee reviewed the project to "make sure [they] did not experience pain or suffer."

This study's findings will be published in the August issue of The Journal of Experimental Biology.