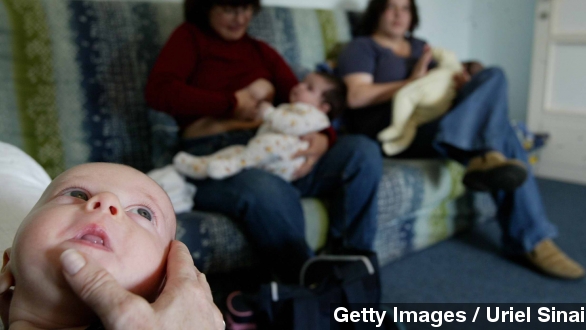 SMS
Breast-Feeding Could Influence IQ, Schooling And Income
By Cliff Judy
By Cliff Judy
March 18, 2015
A study suggests the benefits of breast-feeding extend well into adulthood, but critics say the stigma for women who can't breast-feed is unnecessary.
SHOW TRANSCRIPT

Get ready to get fired up, moms. We're about to talk breast-feeding.

A new study out of Brazil shows breast-feeding provided a litany of benefits later in life, not just in childhood.

The study is set to be the focus of The Lancet Global Health's April cover and found breast-feeding infants led to increased intelligence, more schooling and a higher income as adults.

The study found children who breast-fed for at least a year grew up to gain an extra four points on their IQ and earned an income a third higher than those who were given breast milk for less than a month.

Lead researchers say not only did their study look at long-term affects of breast-feeding instead of simply childhood, but also the population they studied had similar breast-feeding rates at all economic levels. A mother living in poverty was just as likely to breast-feed her baby as a wealthy mother.

These findings will be provocative, to say the least. Breast-feeding seems to bring out the staunchest of supporters and those who defend their right to give their child whatever they see fit.

Breast-feeding isn't an option for many women for physical or work-related reasons, and a University of California, San Francisco researcher told NPR the stigma behind the decision to use formula is real. (Video via Aleph Pictures / "BREASTMILK")

"What I hear from some of my mothers is that if they are giving their babies a bottle in Starbucks or on the bus, they feel like people are giving them dirty looks or saying they should be breast-feeding," Dr. Valerie Flaherman said.

The positive findings were also associated with babies who had total or predominant breast-feeding as their source of nutrition, not partial feedings. Again, that led critics to point out there are a lot of factors besides breast milk at play there.

"So if you're able to feed your baby full-time for 12 months, it means you're probably not going to work," psychologist Sandy Rea told 9 News. "What I'm alluding to here is there's an environmental aspect, that you are very hands on."

But when it comes to something as complex as IQ later in life, the research is less than definitive. Another study published last year found little difference in health and intelligence between siblings who were breast-fed versus bottle-fed.

The study focused on nearly 3,500 people born in 1982. They were given IQ tests at the age of 30, and the study controlled for 10 variables from family income to their mothers' ages when the participants were born.