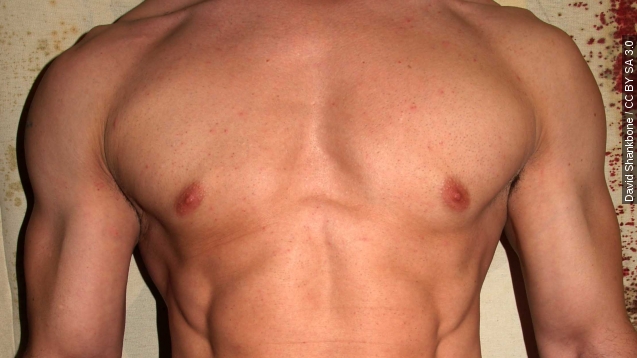 SMS
Breast Cancer Isn't Just A Woman's Fight
By Katie Link
By Katie Link
October 9, 2015
An estimated 2,350 men will be diagnosed with breast cancer in the U.S. this year.
SHOW TRANSCRIPT

"Life's a bitch and then you get cancer," Shelly Silvey said.

"My friend told me to put on your big-girl panties and get going," Suzy Thompson said.

But it's not just a girl's fight.

"Back in April 2010 I was diagnosed with breast cancer. Yes I am a male...so it's different," Bret Miller said. (Video via Ford Warriors in Pink)

Nearly 1 percent of breast cancers in the U.S. occur in men. About 2,350 men will be diagnosed with the disease this year.

Granted, that number is much lower than the around 232,000 women expected to be diagnosed this year.

Symptoms are similar for men and women. Most commonly, men with breast cancer will notice a lump in their breast tissue. (Video via Rethink Breast Cancer)

Treatment is similar too. Surgery, chemotherapy and radiation are the most common methods to fight male breast cancer. And according to the National Cancer Institute, survival rates for men and women are similar.

But for all that is the same in the battle against breast cancer, the differences can't be ignored.

A 2010 study found that nearly 80 percent of males surveyed didn't even know men can get breast cancer and nearly half were concerned that a diagnosis would make them feel less manly.

"Breast cancer ... it's always been out there that it's women always getting it. And most of the time, if men do get it, they are quiet about it. They're embarrassed," Bret Miller said.

Some think National Breast Cancer Awareness Month could be used as a tool to raise awareness for men specifically.

"It's very geared toward women, which is understandable, but it kind of excludes men from it. Make October about breast cancer in general, not just women's breast cancer," breast cancer survivor Christopher Gallo told U.S. News and World Report.

Several states have done just that by designating the third week in October as Male Breast Cancer Awareness Week. Advocacy organizations have also created a separate blue and pink awareness ribbon for the cause.