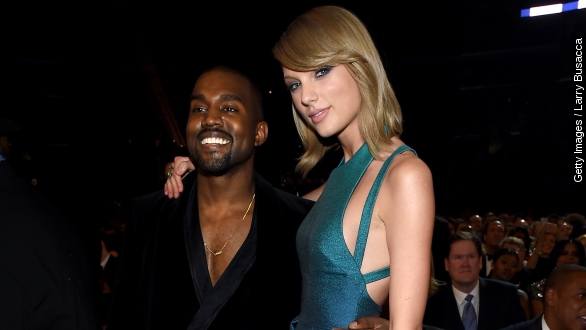 Now if you didn't remember, MGK collaborated with Wiz Khalifa on his hit song "Mind of a Stoner" last year, so maybe he's been eyeing Rose, who calls herself "Muva," for a while. Yeah, she definitely doesn't have a type, huh?

If you didn't know who MGK is... well, now you do. I mean, I'm not saying this could be for publicity or anything because that doesn't happen in Hollywood.

There are some outlets that aren't exactly blessing this hookup — calling Amber Rose a hypocrite. She's 31 and MGK just turned 25, but Rose recently said this referring to alleged couple Tyga and Kylie Jenner on morning radio show "The Breakfast Club":

"That's ridiculous. He has a beautiful woman and a baby and left that for a 16-year-old who just turned 17," Rose said.

Kylie Jenner is still underaged in the eyes of the law and Tyga is 25 years old. But hey, there might not be anything to worry about now cause the two have reportedly broken up — ending a relationship that supposedly didn't even happen.

Over the past few weeks there's been a lot of drama between Jenner and the mother of Tyga's son, Blac Chyna. It seems like it started around the time the Jenner's lip challenge started gaining steam.

Anyway, Chyna posted a picture on Instagram wearing a giant pair of wax lips in what looked like a dig at Jenner...

Who then posted a picture of a bracelet with the caption "Currently," — which might have been a reference to her current dating status with Tyga.

So then Chyna did the natural thing and reacted with a half naked picture — duh. It had the caption "permanently," you know, 'cause she's permanently the mother of Tyga's child.

After that it started getting really messy when Chyna decided to show the world what looked like text messages between her and Tyga — and, whoa. It allegedly shows Tyga blowing up Blac Chyna's phone and wanting to get back together. If the messages are real, that might be one reason Tyga and Jenner have called it quits.

Although there is also speculation the rapper may have cheated cheated on Jenner.

"He's got a lot of amazing ideas. He's one of those people that's just like idea, idea, idea,” she explained. "He's very creative."

That was Taylor Swift on Entertainment Tonight Wednesday talking about Kanye West. There have been rumors that the two plan on collaborating in the near future.

So they've obviously settled things after the whole Grammy's incident.

Now, Swift did say the two have yet to actually get in the studio, but maybe that will change soon. Between extending an olive branch to Swift and helping Kim Kardashian come to terms with Bruce Jenner's transition, Kanye West could be on track to win back his critics.