Breaking Down The Richest Fight In Boxing History 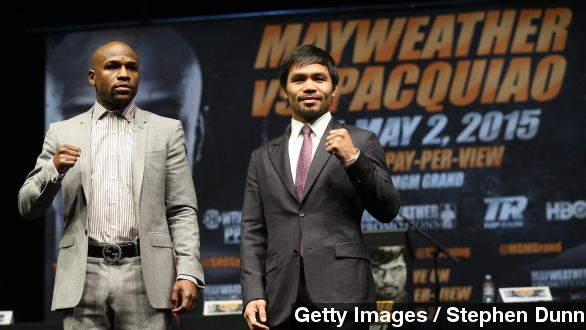 SMS
Breaking Down The Richest Fight In Boxing History
By Jake Godin
By Jake Godin
March 13, 2015
Floyd Mayweather Jr. and Manny Pacquiao's upcoming boxing match is set to break more than one record in terms of the amount of money it'll churn out.
SHOW TRANSCRIPT

Though that fact might be disputable, something that's less disputable is how much money the upcoming fight will churn out. Here's Mayweather vs. Pacquiao by the numbers.

First, the purse. Estimates range from at least $200 million to upward of $400 million with a 60-40 split for Mayweather. The purse is decided by the promoters of a fight, and we won't know it until we get closer to the big day.

But to put Mayweather's share in perspective, even if the total purse is only $200 million, he will net at least $120 million for the fight. That's around 30 percent of what the man's made in his entire boxing career.

And that number is expected to be even larger after pay-per-view and ticket sales — both of which are also expected to break records.

The promoters say pay-per-view is expected to start at around $90 for the fight in standard definition while HD will tack on an extra $10 for $100. Just how many of those are expected to sell?

Some estimates put total sales at a little over 3 million, or $300 million, some of which would go toward the fighters' purse.

Ticket sales at the 16,800-seat MGM Grand Arena in Vegas are expected to be a little pricier, ranging from around $1,000 to $7,500 at face value. Of course, if they're being resold, you can expect to pay more. A lot more.

An analyst with SeatGeek, an online ticket broker, tells NPR that scalped floor-seat tickets are starting at $28,000 and even the cheapest seats are pricing in around $5,400.

So clearly there's a lot of money to be made here. And while its expected to break all manner of records in terms of sales, we'll just have to wait until later to find out by how much.