Breaking Down The Death Penalty Debate 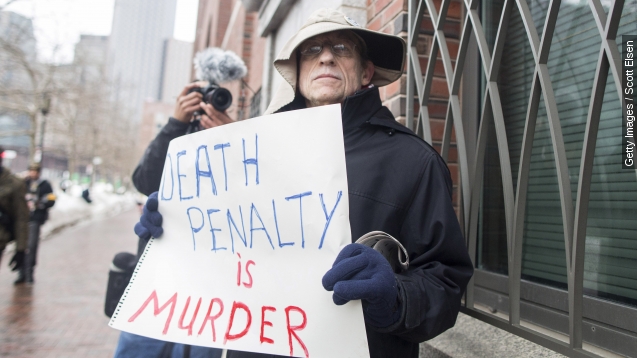 SMS
Breaking Down The Death Penalty Debate
By Ben Lawson
By Ben Lawson
October 14, 2015
Debate about the death penalty has been around about as long as the punishment itself.
SHOW TRANSCRIPT

The death penalty has been used in the U.S. for more than two centuries. And it's still one of the most hotly debated issues in the country.

"I still think it has a deterrent capability," said Oklahoma Sen. Tom Coburn.

That's one of the biggest arguments in favor of it — that the possibility of death as a punishment prevents people from committing capital crimes.

But that's a hard claim to back up. A 2009 study said 88 percent of the criminologists polled did not believe fear of the death penalty prevents capital crimes.

But other research found fewer homicides occurred in Texas in the months before or after an execution. Although some say the model used in that research could have been flawed.

The Constitution is also frequently brought up in the death penalty discussion.

Many say it goes against the Eighth Amendment, which protects citizens from "cruel and unusual punishment."

Lately, that debate has focused on the method used to execute criminals.

In June of this year, the Supreme Court ruled 5-4 in favor of Oklahoma's use of a controversial drug cocktail used in multiple botched executions. In January, one man sentenced to death writhed in pain for hours before the drug mixture killed him.

Justice Antonin Scalia argued that because the Fifth Amendment appears to consider the death penalty, it can't be considered unconstitutional. (Video via C-SPAN)

Another issue frequently brought up in the death penalty debate is potential flaws or biases in the court system.

Many point to the high number of minorities who are sentenced to death.

Forty-two percent of death row inmates are black, while only about 13 percent of the entire U.S. population is black.

And one study found that since 1973, about 4 percent of people sentenced to death were wrongfully convicted.

The death penalty debate isn't going away. Aside from four years in the 1970s, capital punishment has been permitted in the U.S. since 1790.