Breaking Down Benghazi: Here's What Happened At The Embassy 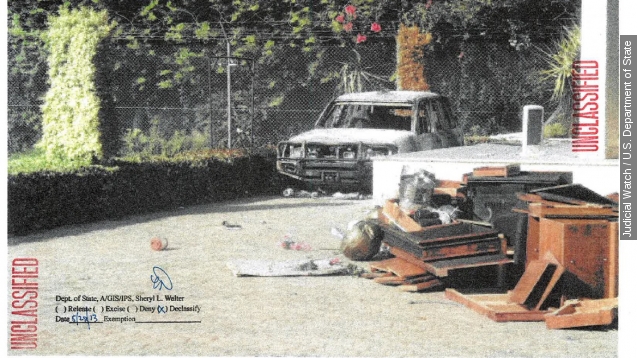 SMS
Breaking Down Benghazi: Here's What Happened At The Embassy
By Jake Godin
By Jake Godin
October 20, 2015
The word Benghazi gets thrown around a lot. Here's a down-to-the-minute breakdown of what happened that night in Libya.
SHOW TRANSCRIPT

One word has been in the news a lot: Benghazi.

To understand why, you need to know what happened on that day in 2012.

Benghazi is Libya's second largest city and sits on the country's eastern coast.

It's the 11th of September. Gunmen storm a U.S. compound in western Benghazi.

The attack starts around 9:40 p.m. when the gunmen climb the compound's walls, open the gates and set fire to the buildings.

About 20 minutes later, a security agent, along with Ambassador Chris Stevens and Foreign Service Officer Steven Smith, try to escape. The security officer escapes but without Stevens or Smith.

At around 10:07 p.m., backup arrives from an annex about a mile away, and the security agents search for Stevens. They find Smith’s body but not the ambassador's.

Shortly after they get to the annex, at around midnight, there's another attack. It’s repelled, and backup from Tripoli arrives about five hours later.

Around 5:15 a.m. a third attack occurs. This time, it's mortar fire. Two security agents and former U.S. Navy SEALs Tyrone Woods and Glen Doherty are killed defending the Annex from the roof. Two others are seriously wounded.

In the end, four people died. The U.S. scrubbed its diplomatic mission in Benghazi, and people wanted to know what happened.

The administration's initial response blamed the attack on a mob responding to an anti-Islam film.

"This is a response to a hateful and offensive video that was widely disseminated throughout the Arab and Muslim world. ... This is a spontaneous reaction to a video," Susan Rice said on MSNBC's "Meet The Press."

That turned out to be inaccurate. The mob was more likely a coordinated attack that Islamist terrorist group Ansar al-Sharia in Libya took part in.

The investigation into the attack has been a saga, to say the least. Nine reports from six different committees have attempted to explain what went wrong.

The House Select Committee on Benghazi even created another investigation into Hillary Clinton's private email server. (Video via C-SPAN)

A move some say is politically motivated.

"But we put together a Benghazi special committee, a select committee. What are her numbers today? Her numbers are dropping," Rep. Kevin McCarthy said on the "Sean Hannity Show."

On Thursday, Clinton will testify to the House Select Committee on Benghazi. It will be the committee's fourth public hearing. (Video via ABC)