Breakfast Debate: To Eat Or Not To Eat? 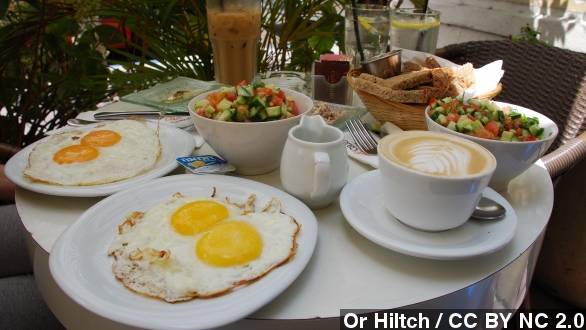 SMS
Breakfast Debate: To Eat Or Not To Eat?

By Madison Burke
October 23, 2014
Conflicting studies published in the same week re-ignited the debate over whether we should be eating breakfast.
SHOW TRANSCRIPT

A study released over the summer says eating breakfast will help you lose weight, but another released just this week says skipping the meal will help you trim down. So which one is true? Let's break down these conflicting studies.

A team at Monash University in Australia found skipping the meal actually helped people lose weight. Researchers asked 32 liver-disease patients to begin skipping breakfast and watched them for 12 weeks. In the end they found all participants lost weight and reported better liver health.

This might be surprising, as we've all heard skipping breakfast encourages overeating later in the day. But let's look at the obvious. We don't know what kind of breakfasts the participants usually ate. If they were eating breakfasts like any of these, it makes sense that they lost weight and their livers were healthier when they cut out this meal. Then there are some other factors to consider:

7 NEWS: "Those who participated in the trial could essentially eat whatever they wanted, as long as they eat sensibly and didn't gorge on food. They were also encouraged to exercise."

Eating right and exercising — so in other words, those participants were asked to adopt healthy practices that could've caused their weight loss independent of their breakfast habits. And they were told not to eat too much later in the day, so we don't really know if they would have overeaten otherwise.

On the other hand, researchers from the University of Missouri-Columbia say eating breakfast is important for maintaining a healthy weight. Again, they pointed to evidence those who eat breakfast are less likely to overeat throughout the day.

Aimed at learning more about obesity in young adults, the study compared teen girls who did eat breakfast and those who didn't.

The study says it's likely the protein in the breakfast foods that's curbing people's appetite throughout the day. It states a chemical reaction in the brain causes feelings of contentment.

This isn't exactly a new idea. Protein in general has been shown to ease appetite, regardless of what time you consume it.

ANN KULZE VIA DR. ANN WELLNESS: "One of the easiest ways to get your hunger under wraps is to get some protein at each feeding."

So the breakfast debate still hasn't been settled, but we do know this much: In order to lose weight, you have to burn more calories than you take in throughout the day — morning, afternoon and night.