Brazil's President Is 1 Vote Away From Being Removed 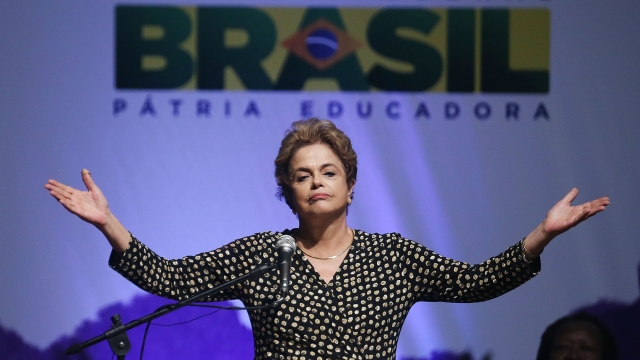 SMS
Brazil's President Is 1 Vote Away From Being Removed
By Grant Suneson
By Grant Suneson
August 10, 2016
Brazil's Senate cleared another hurdle in President Dilma Rousseff's impeachment trial, indicting her. Now, she's one vote away from being removed.
SHOW TRANSCRIPT

There's big news coming out of Brazil, and it has nothing to do with the Olympics.

On Wednesday, the senate voted 59-21 to indict President Dilma Rousseff.

SEE MORE: If Brazil Votes To Remove Rousseff, Her Replacement May Not Be Better

Rousseff was accused of moving money from Brazil's central banks to pay for social programs before her re-election campaign in 2014.

Opponents say Rousseff intentionally did that to made the economy look healthy — in reality, it was heading toward the worst recession Brazil's had in decades.

Rousseff maintains her innocence and compared the attempted ouster to a coup.

The trial is due to start sometime after the Olympic closing ceremony in late August. The trial should last only a few days, and things are looking pretty grim for Brazil's first female president.

Rousseff would be removed if a two-thirds majority of the 81-person Senate votes to convict her. The 59 votes the Senate cast to indict her would be more than enough.

If convicted, Rousseff's remaining term will be served by Vice President Michel Temer, who's also under investigation for a totally separate corruption scandal. Brazil's next presidential election will be in 2018.