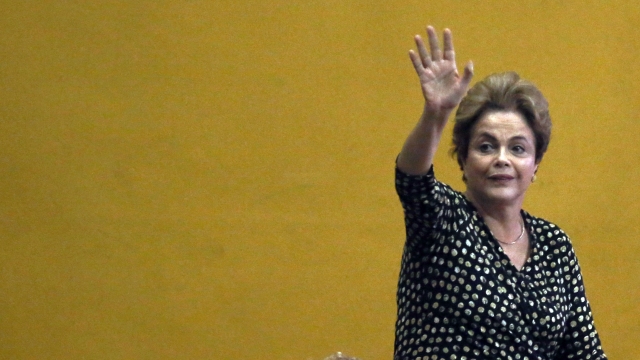 It's the country's first impeachment in 24 years. The trial could last up to six months, which means proceedings will likely overlap the Olympic Games in Rio de Janeiro this summer.

Rousseff has been trying to clear her name ever since she was accused of covering budget gaps by pulling money from state-run banks in an effort to win her 2014 bid for re-election.

"I will fight to survive. Not just for my term in office, but I will fight because what I'm advocating and defending is the democratic principle," Rousseff said on CNN.

In April, the country's lower house approved the impeachment process and sent it to the Senate for a vote.

During the Senate 55-22 vote Thursday, Rousseff appealed to stop the session — but that was rejected.

Public polls from April show more than 60 percent of Brazilians rate the Rousseff government as poor.

And protesters once again filled the streets in the days leading up to the vote, calling for the president's removal.

Several politicians — including her chief of staff — are accused of being involved in the Petrobras scandal, a wide-reaching set of allegations involving bribes and kickbacks from the government-affiliated oil company.

Brazil's former vice president, serving as interim president, will now face several issues the country has been reeling from, including an economic recession and the spread of the Zika virus.