Pence Gets Called Out For Being Trump's Clean-Up Crew 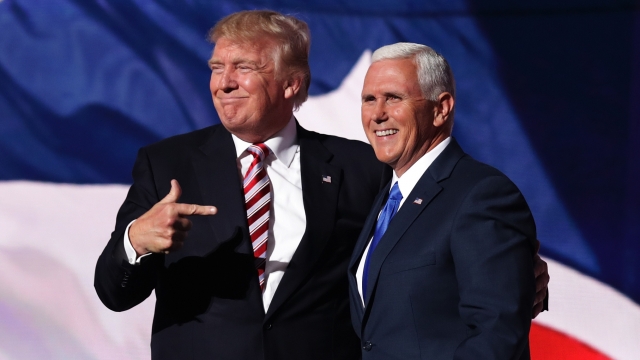 SMS
Pence Gets Called Out For Being Trump's Clean-Up Crew
By Eugene Daniels
By Eugene Daniels
August 4, 2016
During his short time as Donald Trump's vice president, Mike Pence has had to clear up a lot of what Trump has said.
SHOW TRANSCRIPT

“I’ve noticed you’ve been softening up on Trump’s words and policies. Is this going to be your role in the administration?”

That's 11-year-old Matthew Schricker asking Gov. Mike Pence if his role of "cleaner-up-in-chief" will extend into a Donald Trump presidency. Pence answered the way almost any politician would: by standing his ticket-mate, saying, "Sometimes things don’t come out the way that you mean them."

Of course that's true, but he didn't refute the basis of the question: In the less-than-a-month he's been the VP pick, he's spent an unusual amount of time trying to clarify or clean up after his billionaire running mate.

And this week, the difference in their tones has never been more stark. Just hours after Trump attacked the family of a dead soldier on Twitter and in interviews, the campaign released a statement from Pence praising the family, saying they "should be cherished by every American."

Then, after Trump refused to endorse Paul Ryan in his primary in what some saw as payback for the speaker's reticence to endorse the nominee earlier this year, Pence split with his running mate and sided with Ryan.

This is odd. It sometimes seems like the two men aren't actually running together. Presidential and VP nominees don't always agree on everything, but the latter usually defers to the former and what they have said or believe.

And the "apologist" role Pence is playing is one of the main reasons so many top Republicans passed on the Trump ticket. He's undisciplined and says whatever he wants when he wants. That works for his supporters — it's part of why they like him. But it also means someone has to clean up the messes his brashness leaves behind.