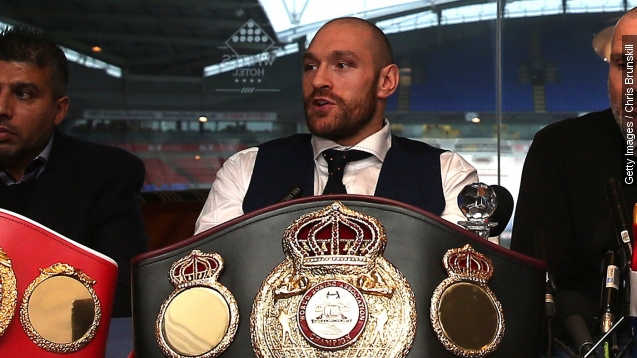 SMS
Boxer Tyson Fury Stripped Of Title, Investigated By Police
By Matt Moreno
By Matt Moreno
December 9, 2015
Fury was stripped of his IBF title after a disagreement with the federation. He also faces a hate crime investigation for comments he made on the BBC.
SHOW TRANSCRIPT

But now, about two weeks after that fight, he's been stripped of his IBF title, and British police have opened a hate crime investigation into comments he made in an interview. The matters are separate. (Video via Sky News)

The championships chairman at the IBF said Fury had his title stripped because he didn't agree to fight the federation's chosen challenger, Vyacheslav Glazkov. Instead, Fury agreed to a rematch with Klitschko. (Video via The Telegraph, HBO and The Guardian)

Fury responded to the IBF's decision on Twitter, saying "... if the WBA&wbo&ibo want to strip me go ahead."

On the same day, Greater Manchester Police confirmed an investigation of the boxer for allegations of a hate crime after comments he made on the BBC about homosexuals.

The comments came days after an interview with the Daily Mail in which Fury responded to a question about his belief about the end of the world.

He said: "There are only three things that need to be accomplished before the Devil comes home. One of them is homosexuality being legal in countries, one of them is abortion and the other is paedophilia."

Fury has also been criticized for his comments about women in the past.

He remains the WBA, WBO and IBO titleholder. A date and place for his fight with Klitschko has not yet been announced.