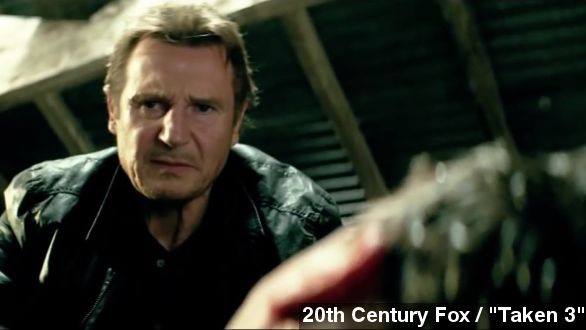 By all measures, 2015 is sure to be an exciting year at the movies, so appropriately we start the year with one more Liam Neeson action movie.

"What are you going to do?"

"I'm going to finish this!"

Well thank God, someone should. "Taken 3" inexplicably takes the No. 1 spot at the box office, bringing in an estimated $40 million despite being harpooned by critics as a completely unnecessary ending to an even more unnecessary trilogy.

"Taken 3" barely made it into double digits with a 12 percent rating on Rotten Tomatoes, but what's interesting is the 72 percent audience score.

So, while the 62-year-old god-like action star Liam Neeson didn't deliver a critically acclaimed product, moviegoers were happy to watch him kick ass and take names for two hours one more time. (Video via Warner Bros. / "Clash of the Titans")

So much so, in fact, "Taken 3" is currently the second-highest January opening ever behind Kevin Hart's "Ride Along" from 2014.

To add to the confusion, "Taken 2" had the best opening weekend of the trilogy with $45 million, but it was rated just as bad by critics and rated much worse by the general audience. So, go figure.

"What happens when a man stands up and says enough is enough?"

At No. 2 is the long-overdue biopic of civil rights leader and American icon Dr. Martin Luther King Jr. "Selma" brought in an estimated $11 million over the weekend.

While the film itself is critically acclaimed, what truly makes it stand out is the moment in time at which it's been released – maybe it's wise that filmmakers waited so long after all.

In the same way that "Fruitvale Station" in 2013 spoke so clearly to the Trayvon Martin controversy, director Ava DuVernay tells Time Selma does the same for the unrest in Ferguson, Missouri.

"Selma is not a film that takes place in the context of history, you watch those images and you understand how it feels to be someone in 1955, shocked by what they see on television because it just happened to you in August."

Coming in at No. 3 is "Into the Woods," bringing in an estimated $9.7 million in its fourth weekend.

As for next week, "Ride Along 2" with Josh Gad! I mean, "The Wedding Ringer." Yep, that's totally what I meant.