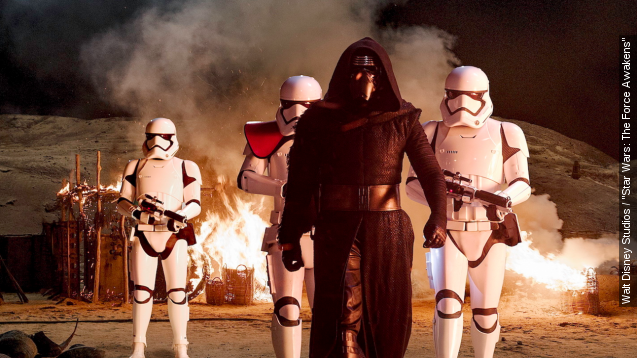 SMS
Box Office Top 3: 'Star Wars' Gets Its First Real Challenge
By Steven Sparkman
By Steven Sparkman
January 10, 2016
"Star Wars" is still on top at the box office, but it saw its first real taste of competition with the debut of "The Revenant."
SHOW TRANSCRIPT

For the first time since it debuted, "Star Wars" actually had a close contender at the domestic box office. I know, hard to believe.

"The Force Awakens" brought in an estimated $41.6 million, but the real story was overseas.

That's because the film finally debuted in China, where "Star Wars" isn't the cultural powerhouse it is elsewhere around the globe. Early reports say it had a decent opening of around $53 million in its first two days. (Video via CCTV)

But it also helped lay the groundwork. Disney is playing the long game in its quest to turn China into a land of "Star Wars" fans, including giving one of the country's biggest pop stars a Jedi makeover. (Video via LuHan Studio)

Back in the U.S., audiences decided what they were really in the mood for was a gritty, R-rated story of survival and revenge.

The nationwide release of "The Revenant" made way more money than analysts were expecting, bringing in an estimated $38 million for the weekend and actually beating "Star Wars" in Friday ticket sales.

The surprising showing is sure to energize the whole "Will Leonardo DiCaprio get an Oscar?" debate, as if that needed any help.

It also coincides with a steep slide for Quentin Tarantino's "The Hateful Eight," because apparently there's only room for one gore-filled snowy Western at the box office.

And finally, "Daddy's Home" brought in an estimated $15 million, showing goofy comedies can have staying power, too. Which bodes well for next week.