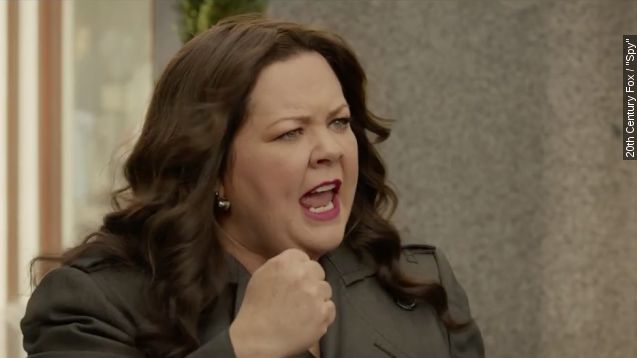 This weekend, Melissa McCarthy does her very best 007 impression. Or maybe she’s going for Austin Powers.

With three new releases in theaters this weekend, Melissa McCarthy’s “Spy” easily takes the No. 1 spot, bringing in an estimated $30 million.

Also, an impressive 95 percent Rotten Tomatoes score makes “Spy” one of the best-reviewed comedies of the year.

And while critics can be especially hard on comedies, the dynamic duo of director Paul Feig and leading lady Melissa McCarthy have done a great job pleasing the average moviegoer and the typically high-brow movie critic. (Video via Universal Pictures / “Bridesmaids”)

One of the ways they did that this time was by adding real action. “Spy” is by all accounts a funny action movie, not a comedy hoping to pull off half-hearted danger.

“Usually in a spy comedy, people are kind of bumbling. … There’s some solid ass-kickery going on amongst the laughs.” Jeremy Jahns said

"This is comedy, but it's not a spoof. And while we’re laughing, 'Spy' continues to propel the espionage and surprisingly visceral violence forward." IGN's Lucy O'Brien said.

Unfortunately though, the film's debut fell about $5 million short of what analysts predicted. On the other hand, well-reviewed movies tend to have better legs, so we’ll see.

In at No. 2 is "San Andreas," bringing in an estimated $26 million in an impressive sophomore weekend.

While ticket sales for the disaster flick dropped about 50 percent, it still beat out two brand-new wide releases after having a huge debut last week.

The "Insidious" franchise, like most horror films, has the potential for huge returns on investment. The first "Insidious" movie cost just $1.5 million to make and ended with a worldwide gross of $97 million.

“Insidious: Chapter 2” did even better, eventually grossing $161 million with a $5 million production budget.

And considering there are no other horror films set for release until the second week of July, there’s no reason to believe “Insidious 3” won’t be another very low cost and highly profitable film.

Oh and if you’re wondering why Ari Gold and the gang aren’t on this list – you’re not alone. Warner Bros wants to know, too. “Entourage” claimed fourth place this week with a $10 million debut. Not great.

As for next week, the T. rex gets an ill-advised upgrade.

This video includes music by Pierlo / CC BY 3.0.