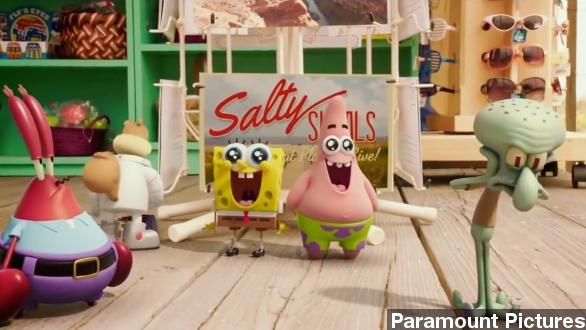 This weekend at the box office — a trip to Bikini Bottom to visit everyone's favorite sponge who lives in a pineapple under the sea.

SpongeBob's second feature-length film and first venture into live action on the big screen takes the No. 1 spot at the box office this weekend, bringing in a solid $56 million and finally dethroning "American Sniper."

The movie also did significantly better than SpongeBob's first feature film, which brought in $32 million on its opening weekend.

Nickelodeon introduced audiences to the energetic sponge in 1999, which means SpongeBob, Patrick, Mr. Krabs and others have been staples of the kids network for more than 15 years.

As Forbes film writer Scott Mendelson points out, "This film ... benefited from what amounts to multi-generational appeal. ... Adults my age and younger who were kids when the show first premiered ... and you have kids of varying ages who weren’t even born when the show premiered."

Next up, best picture nominee "American Sniper" continues to boast great box office numbers — even in its fourth weekend in wide release. The modern war movie brought in an estimated $24 million, bringing its domestic total to $282 million.

The story of Chris Kyle, the real American sniper who the movie is based on, has sparked controversy, but nothing has slowed the film's takedown of box office records.

Last week it became the highest-grossing war themed movie of all time, taking down "Saving Private Ryan," and this week it blew past "Matrix: Reloaded" to become the second-highest-grossing R-rated film of all time, only falling behind "The Passion of the Christ," which brought in $370 million domestically.

And lastly, from the directors of the "Matrix" trilogy comes a movie that is just as weird and expensive — but not nearly as popular. "Jupiter Ascending" brought in a dismal $19 million this weekend, good for third place in front of another colossal flop: "Seventh Son."

Now, a $19 million opening isn't inherently bad, but "Jupiter Ascending" cost about $30 million more to produce than "Iron Man" did. And, if you're wondering, Tony Stark and company brought in just under $99 million in its opening weekend.

Add that to the terrible 22 percent rating on Rotten Tomatoes and it seems "Jupiter Ascending" will be free-falling at the box office for the next month.

Lana and Andy Wachowski reached international fame with the "Matrix" trilogy, but since then the siblings have been on a downward spiral at the box office and practically throwing away money in the process. (Video via Hitfix)

And now "Jupiter Ascending." Breaking even on your budget is a pretty low bar in the movie industry, and this once-dynamic duo is having trouble meeting it.

As for next week, its Valentine's Day, and nothing says "I love you" quite like bondage.