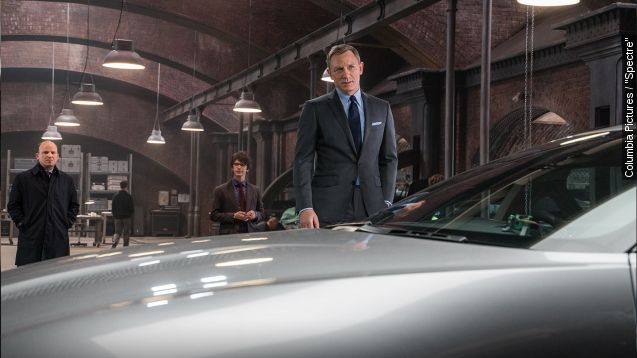 SMS
Box Office Top 3: "Spectre" Continues To Climb Bond Franchise Ladder
By Jamal Andress
By Jamal Andress
November 15, 2015
While it doesn’t look like “Spectre” will be able to compete with “Skyfall’s” run at the box office, it's quickly moving up the Bond franchise ladder.
SHOW TRANSCRIPT

Seriously, I wish failure upon any Christmas movies that comes out before Thanksgiving. There I said it.

Without breaking a sweat, Mr. Bond holds on to the No. 1 spot this week, bringing in an estimated $35 million in its second weekend out.

And while it doesn’t look like “Spectre” will be able to compete with “Skyfall’s” phenomenal run at the box office it is quickly moving up the Bond franchise ladder.

After just two weekends at the box office, it’s already 5th on the all-time list of Bond films and  last week it had the second largest opening of any Bond flick in history.

But with great ticket sales comes even greater production budgets and “Spectre” was no exception.

Holding on to the no. 2 spot is Charlie Brown and the gang bringing in an estimated $24 million. That puts it domestic total at more than $82 million.

Peanuts has had a solid two weeks at the box and it should continue to do well that is until, “The Good Dinosaur” takes its turn at the box office and steals all the children away.

It may not be December yet but that won’t stop Hollywood or Macy’s stores across the country from getting you in the Christmas spirit. Taking the the No. 3 spot this week is “Love the Coopers” bringing in an estimated $8.4 million.

And while the quirky family comedy did beat out the the other new release from this weekend, critics are not necessarily raving.

“This is your obligatory, wacky, dysfunctional, family Christmas comedy with some niblets of drama for poignancy.” Christy Lemire said.

“Love the Coopers” is boasting an unfortunate 17 percent on rotten tomatoes for dumbing down a great cast to make a fairly jumbled holiday movie.

Lucky for the Coopers this flick only cost $17 million to make and should be relevant at least until December 25th.

That being said, it will have to deal with a seemingly never ending-list of other Christmas movies coming out between now and then.

As for next week, may the odds be in your favor one last time.