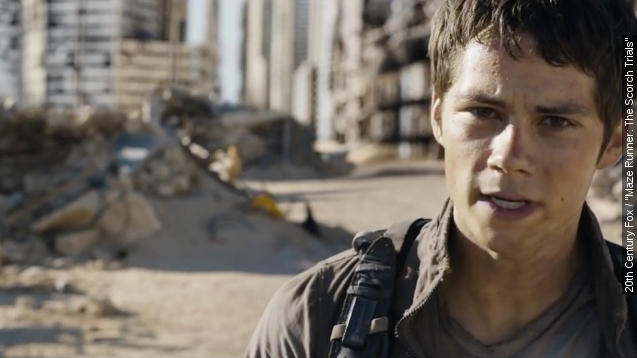 This week at the box office the inevitably dystopian future is filled with teenage angst and looks as bleak as ever.

Taking the No. 1 spot this week is “Maze Runner: The Scorch Trials,” the second installment in the Maze Runner trilogy, which brought in an estimated $30 million.

Maze Runner is the latest to the YA dystopian film party, and unfortunately for 20th Century Fox, has the smallest numbers of the group behind two Divergent films and way behind the Hunger Games trilogy.

But let’s be clear: A $30 million opening is not bad. In fact, it’s pretty good.

“Scorch Trials” cost about $61 million to make. Last weekend, the Maze Runner sequel made $38 million overseas, and this weekend it brought in another $40 million. Add that to the $30 million debut here in the states, and you’re looking at a much nicer total of $108 million after just two weeks.

Broadly speaking, the young adult dystopian film business is a good one.

Hunger Games has milked it for 3 movies and $2.3 billion. But success in the genre is not guaranteed.

“The Giver,” for example, falls squarely in line with “The Hunger Games,” “Divergent” and the like, but only managed $45 million total at the domestic box office and no one is clamoring for a sequel.

Speaking of sequels, Johnny Depp is back in the top three, and it doesn’t involve pirates, ships or buried treasure.

Taking the No. 2 spot this week is the true story of James Whitey Bulger in “Black Mass.” Johnny Depp and company managed to bring in $23 million during this crowded weekend.

“He really has turned into Whitey Bulger but more importantly than just looking like him, he creates his essence,” Deadline's Peter Hammond said.

“I really appreciated the fact that Depp was bothering to give a real performance because it’s been a while,” The Wrap's Alonso Duralde said.

Depp has struggled at the box office for the better part of six years, starring in movies that were destroyed by critics and ignored by audiences. From the “Lone Ranger” to “Transcendence” to the most recent belly flop, “Mortdecai.”

But with “Black Mass” drawing Oscar buzz and pulling in solid box office numbers, Whitey Bulger could be the comeback role Depp needed.

At least we hope it is, because if not we may never get rid of Jack Sparrow.

Falling from second to the third place this weekend is “The Visit,” bringing in an estimated $11.3 million and bringing the domestic total to $42, which, if you’re wondering, is nearly eight times the production budget.

As for next week, Robert De Niro age jokes.