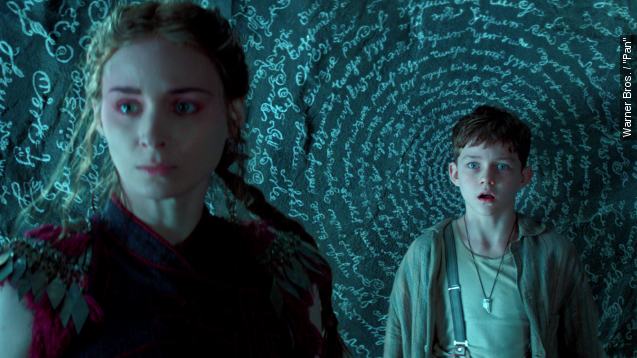 Paramount Pictures released the first film based on the story of Peter Pan way back in 1924, and while Pan never grows old, movies about Pan definitely do.

Holding on to the No. 1 spot this weekend is "The Martian," bringing in an estimated $34 million in its second week out. That brings its domestic total to $108 million and puts "The Martian"’s worldwide box office sum at $227 million after just two weeks.

Praise from critics and audience word of mouth has lead to a very strong second weekend for the sci-fi thriller, which had just a 32% drop in ticket sales.

Taking the No. 2 spot again is "Hotel Transylvania 2," bringing in an estimated $20 million and managing to spend a third straight week in the top three.

"Hotel Transylvania 2" is quickly creeping up Adam Sandler’s list of highest-grossing movies. After just three weeks at the box office, the animated sequel has a $116 million domestic total. (Video via ScreenSlam)

Taking a very, very expensive third place bow is "Pan," bringing in an estimated $15 million in its first week out.

Expensive because "Pan" cost the folks at Warner Bros. just over $150 million to produce, the second most expensive movie the studio has released this year right behind "Jupiter Ascending," which cost more than $176 million and also bombed its opening weekend.

To go along with the lack of ticket sales, there is an abundance of bad reviews.

"For a movie that clearly required a lot of time, consideration, and effort, Pan ends up feeling rather slapdash," IGN’s Josh Lasser said.

Or to put that another way. "This joyless, juiceless Pan is a theme-park ride from hell," Rolling Stone’s Peter Travers said.