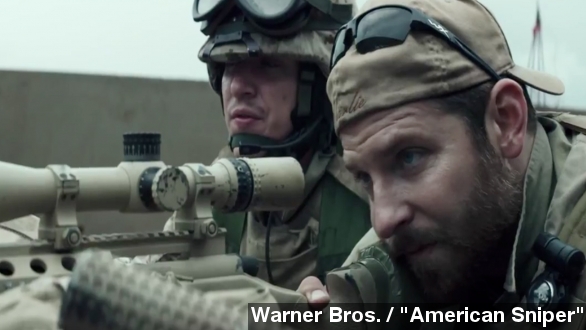 For every critic singing the film's praises, there seems to be another angered over the Best Picture nominee.

"This one is just. An American hero. He's a psychopath patriot and we love him," Bill Maher said.

"Some in Hollywood are taking aim at the Navy Seal. Michael Moore tweeted that snipers like Chris Kyle are cowards," reported Fox News' Todd Starnes.

But "American Sniper's" box office strength is undeniable. It's raked in more than $200 million thus far.

Next up, Jennifer Lopez does a very bad thing.

J.Lo plays a high school English teacher who uses the good-looking student next door to cope with a rough divorce. But hey, at least Hollywood keeps it legal.

"They want to make this seedy ass movie about this student who bangs a teacher and bad things happen, but they don't want to be creepy about it so they need to make him 20 years old, I guess," said critic Jeremy Jahns.

"It was hilariously bad but not in an entertaining way. It just got to a point where I had to force myself to be entertained," said Chris Stuckmann.

Rotten Tomatoes has this movie at an abysmal 13 percent from critics.

But awful or not, Universal Pictures is laughing all the way to the bank. The film has already earned $15 million on a miniscule budget of $4 million.

"Paddington" comes in at number three, giving audiences a movie they can actually talk about at family dinner.

The modernized tale of the beloved children's books brought in a solid $12 million in its second weekend at the box office and scored the praise of nearly all the film critics.

Next week, what can go wrong when teenagers learn to time travel in "Project Almanac?"

This video includes images from Getty Images and Prayitno / CC By 2.0.