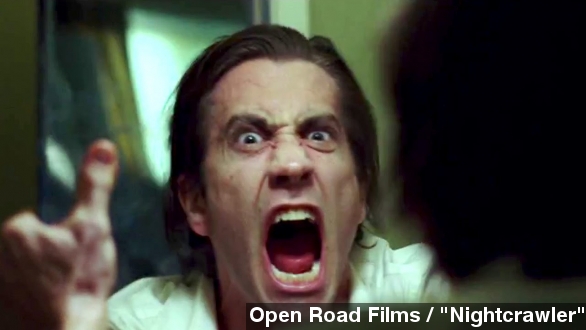 With the creepy spirit of All Hallows' Eve still looming in the air, this weekend thrill seekers were out in full force at the theaters. Look out as all three of our top movies this week will put you on the edge of your seat.

"Think of our newscast as a screaming woman running down the street with her throat cut."

"Nightcrawler," starring Jake Gyllenhaal as freelance news photographer Lou Bloom, was number one at the box office this weekend.

Bloom scours the streets of LA to sell video to local news stations still riding on that age-old mantra: "if it bleeds, it leads."

Which most definitely was what critics and audiences alike were looking for. "Nightcrawler" made its way to a 94 percent on Rotten Tomatoes, also boasting an 89 percent score with the audience as of Sunday.

Deadline Hollywood: "It's a horror movie of what we see on local TV and how it gets there. ... This is what we're giving the viewers because the views want to see this stuff and the ratings go up."

But Dana Stevens with Slate asks, are gory details of bloody crime scenes an accurate depiction of what local news consumers really want to see? Writing, "One recurring feeling, watching Nightcrawler, is that it seems like a lot of satirical hue and cry about a social problem I’m not sure the nation is currently plagued by."

But it's the depiction of the film's central scumbag that might have us hearing more buzz about the film as award season rolls around.

YouTube / JeremyJahns: "I saw the entire movie, never saw Jake Gyllenhaal. I saw a guy who creeped the sh%& out of me for two hours but never saw Gyllenhaal. Yeah, he's that good."

YouTube / Chris Stuckmann: "Jake Gyllenhaal gives probably the best performance of his life in this movie."

But in all its glory at the number one spot for the weekend, "Nightcrawler" barely squirmed its way there — beating out number two at the box office by a mere $9,000.

Next up — the movie that flopped its way through its opening weekend, garnering some ugly reviews, has apparently had a bit of a resurrection.

Universal Pictures / "Ouija": "You'll have to break the connection or it will keep coming for you. That's right, "Ouija," the horror movie that horrified critics, was a hit with weekend movie goers looking for a predictable scare.

And after just two weeks in theaters, it's managed to gross nearly six fold what it cost to make. Not too shabby.

Last on our top three, we've got deja vu ... again. Three weeks in a row Brad Pitt's "Fury" has managed to hold its spot as one of the most popular films among weekend moviegoers. (Video via Columbia Pictures / "Fury")

We can't be too surprised. After all, who doesn't love an ass kicking GI Joe-esque Brad Pitt?

Next week: Christopher Nolan's "Interstellar" starring Matthew McConaughey, Anne Hathaway and Jessica Chastain. With a cast like that, we have high hopes. (Video via Paramount Pictures / "Interstellar")