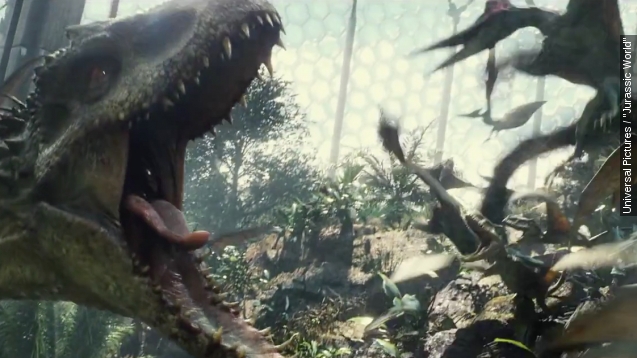 It’s been three weeks since “Jurassic World” stormed into theaters, and the records just keep coming down. For the third week in a row, “Jurassic World” dominated the box office, bringing in an estimated $54 million and just barely nudging “Inside Out” into second place by about $2 million.

In its third weekend “Jurassic World” become the fastest movie ever to reach $500 million at the domestic box office, and this latest feat is just another trophy to add to the pile.

Also, “Jurassic World”’s leading man Chris Pratt is having one hell of a year. He’s the only actor to appear in two of the past year’s top 10 highest grossing films. (Video via Universal Pictures)

Similar praise goes to Universal Studios which has had two billion-dollar films (Jurassic World and Furious 7) in three months.

Touching fewer box office dollars but many more children’s hearts is “Inside Out” taking the No. 2 spot and bringing in an estimated $52 million.

And by children of course I mean movie critics.

An "Inside Out" promo commercial says, “Rolling Stone calls it a flat out masterpiece, Forbes says it’s one of the best pictures of the year and Variety raves its the greatest idea Pixar has ever had.”

The great critical reception has also lead to a better than average second weekend. “Inside Out’s” ticket sales only dropped 42% compared to last weekend.

And last but not least, Universal Pictures managed to get two movies in the top 3 this weekend with “Ted 2” taking third place at the box office and bringing in an estimated $33 million.

In the R-rated sequel Mark Wahlberg still has great chemistry with his pot-smoking teddy-bear but most would call that a small highlight in a pretty bad movie.

“You saw it in Ted, you’ll see it again in Ted 2, Mark Wahlberg and Seth MacFarlane have great chemistry as Ted and John.” YouTube's Jeremy Jahns said.

“Legally Blonde,” “The Hangover” and “Pitch Perfect” all had sequels that, despite not being as good as the original, had great opening weekends. (Video via Metro-Goldwyn-Mayer / “Legally Blonde 2”)

Analysts were tracking “Ted 2” to bring in at least $50 million, and Seth MacFarlane’s latest isn’t pulling anywhere near that.

As for next week, Channing Tatum humps a buzz saw in a tool shed.