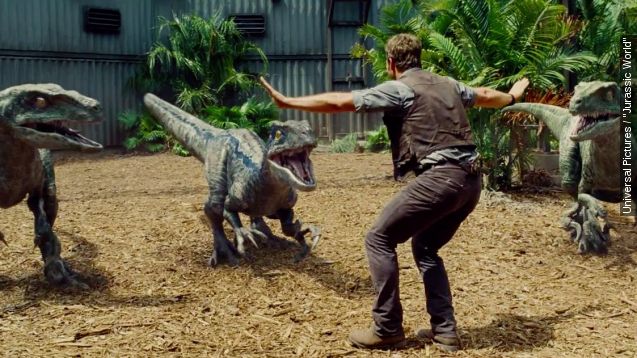 "You're gonna have so much fun. And remember, if something chases you, run," "Jurassic World" character Karen tells her young son.

Universal Pictures scores its second home run of the year with "Jurassic World"'s Indominus-rex-sized weekend at the box office, bringing an estimated $204 million — in one weekend.

How big is a $204 million domestic debut? Well if you take away the Marvel movies, it's the biggest debut weekend ever by about $30 million. The next closest is the finale of the "Harry Potter" franchise.

Include the Marvel Universe, and it's just $3 million shy of being the biggest box office opening ever. (Video via Walt Disney Pictures / "The Avengers")

Jurassic World also managed to bring in more money in its first three days than all three "Jurassic Park" movies brought in during their debut weekends combined.

However, I can't say it packs the punch critically that "Jurassic Park" did. But to be fair, sequels rarely do, even if audiences have to wait two decades for them.

That being said, "Jurassic World" is one of the better monster movies in recent memory — emphasis on monster, not movie.

"It's a monster movie where Chris Pratt and Bryce Dallas Howard are chasing around this thing to figure out how they take it down. … What I wanted from Godzilla, I got outta this movie," Kristian Harloff said.

"There is enjoyment to be had if you see it as a monster movie, not a Jurassic Park movie," YouTube's Jeremy Jahns said.

Also for those who are wondering, Chris Pratt told Entertainment Weekly he's signed on for at least one sequel — or 38; he's not sure.

With "Jurassic World" devouring most of the ticket sales this weekend, "Spy" had an admirable second place finish, bringing in an estimated $16 million. With a $29 million opening weekend, that's a 45 percent drop in ticket sales, but much better than "Insidious: Chapter 3," which dropped 67 percent and is also in its sophomore weekend.

Holding strong in its third weekend is "San Andreas," which brought in an estimated $11 million.

As for next weekend, school counselor of the year goes to this guy. (Video via Open Road Films / "Dope")