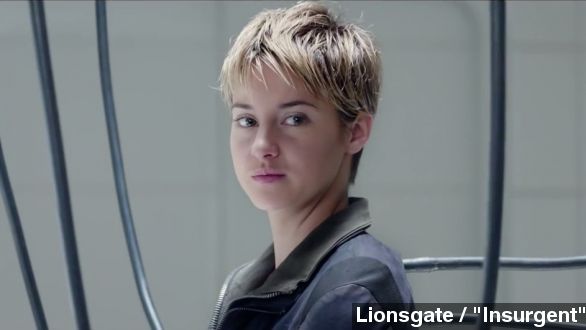 Whether you love or loathe factions, tributes, Team Jacob and the like, young adult movies are here to stay – even if some of them aren’t that good.

Taking the No. 1 spot this week is “Insurgent,” the second movie in the “Divergent” franchise, bringing in a remarkable $54 million and tying the debut weekend total of the first film in the series.

Both films in the “Divergent” franchise have taken hits from critics for looking a lot like the “Hunger Games” – except worse.

“A white teenage heroine, must lead a revolt against a ruthless dictator. Wait! Guys, we did this one; it’s the Hunger Games.”

"It feels a lot like a Junior Varsity Hunger Games,” Mark Ellis said

The Rotten Tomatoes score sits at 32 percent, and the critics' consensus is that this sequel is a “step back for a franchise struggling to distinguish itself from the dystopian (young adult) crowd.”

But here’s the best part: The young adult crowd couldn’t care less. Critics be damned, audiences around the U.S. and the world are not only going to see “Insurgent” but even enjoying it.

"Insurgent" boasts about a 70 percent audience approval rating on Rotten Tomatoes. And in its debut weekend, the the second installment in the "Divergent" series cracked the $100 million mark in worldwide box office ticket sales.

Now, the “Divergent” series isn’t pulling off "Hunger Games" box office numbers, or critical acclaim, but it is most certainly making a profit.

Next up, the Disney classic reboot “Cinderella” remains in the top three this week but falls to the No. 2 spot, bringing in an estimated $34 million.

The 2015 version of the 19th-century classic is nothing new story-wise. From the sparkly glass slipper to the shape-shifting mice, this is the same fairy-tale you’re used to, and The New York Times and others say that’s all right. (Video via YouTube / Disney)

Plus, unlike some of the other iterations of Cinderella, it seems critics and audiences alike love the classic story when it’s done correctly – meaning without Hilary Duff.

And lastly, Sean Penn and Liam Neeson turn the old folks home on its head in the fight for third place.

Sean Penn’s “The Gunman” missed the third place spot this weekend by less than $100,000, which means Liam Neeson, Ed Harris and their respective walkers take the No. 3 spot with “Run All Night,” bringing in an estimated $5.1 million.

“Run All Night” and “The Gunman” – despite competing this weekend – in many ways mirror each other. Both R-rated films follow the "Taken" formula, making a seasoned actor the main attraction of the action film. Both films also did extraordinarily poorly in their opening weekends, falling behind studio expectations.

As for next week, prison for dummies with Kevin Hart.