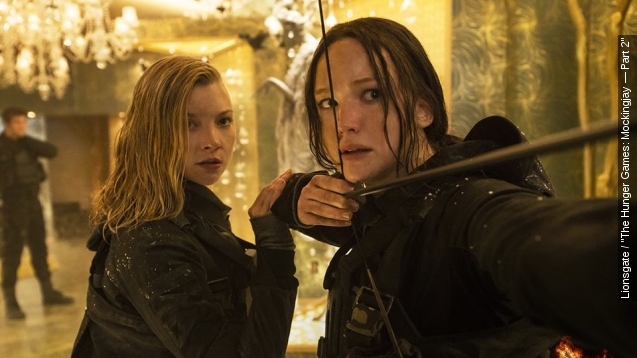 Katniss Everdeen remained at the top of the box office this weekend and beat out the strongest competitor, Pixar's "The Good Dinosaur."

Taking the No. 1 spot at the box office: "The Hunger Games: Mockingjay — Part 2." The final installment to the billion-dollar franchise is expected to gross $74 million over the five-day holiday weekend.

That sounds like a lot, but last week the film had the lowest opening weekend of the entire franchise at over $102 million.

And in a year with some pretty massive box office numbers, "Hunger Games" had the fifth largest domestic opening. (Video via Universal Pictures / "Jurassic World")

Stomping in at No. 2 was Pixar's "The Good Dinosaur," grossing $55 million.

This was Pixar's second release of 2015, the first time the studio has released two films in one year. It had a lot to live up to. July's "Inside Out" grossed over $90 million in its opening weekend.

And where "Inside Out" was adult-friendly just as much as it targeted children, "The Good Dinosaur" seems to be solely in the kids' corner.

"I feel like this is the first Pixar movie that is for kids. And not necessarily in a bad way. ... It's very much done for — I would say — 8-, 9-, 10-year-olds," Tim Grierson of Screen International said.

Coming in at No. 3 is the newest "Rocky" film, "Creed." It's expected to end the holiday weekend with about $29 million at the box office. That would be one of the biggest opening weekends in the franchise's history. And Sylvester Stallone is getting some Oscar buzz, too.

"This movie fights to make its own place in cinema without riding the coattails of the "Rocky" name. ... And Michael B. Jordan did a great job in this movie. This dude gets better, and better, and better as he's in movies," Jeremy Jahns said.

Coming up next weekend, we have the Christmas horror film, "Krampus" and two potential Oscar contenders.

And "Youth" — starring Michael Caine, Harvey Keitel and Jane Fonda — tells the story of a retired orchestra conductor on vacation. Now, I've already seen this one, and this is definitely Caine in his prime. But then again, when isn't he in his prime?