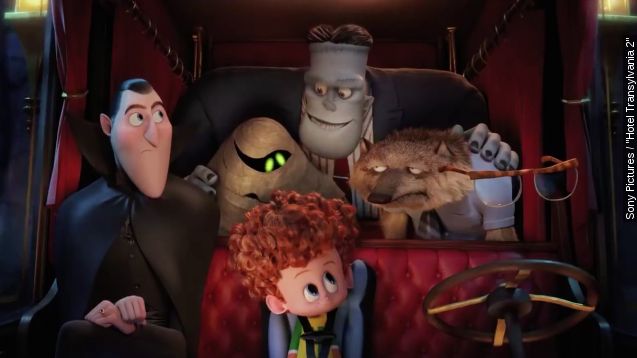 Adam Sandler has his best debut in a decade and, what do you know, he wasn’t on screen for the whole movie. I'm thinking it's animated or bust from now on, chief.

Taking the No. 1 spot this week is “Hotel Transylvania 2,” bringing in an estimated $47.5 million in its debut — which is the best opening weekend for a film released in September in box office history.

The sequel from Sony Pictures couldn’t come at a better time for Sandler or Sony.

Remember "Pixels," Sandler’s big flop of 2015 that didn't break even and carried a 17% on Rotten Tomatoes? Well that’s the highest grossing movie Sony has released all year.

Right in front of the "Paul Blart: Mall Cop 2," which fared even worse in both categories.

Back in July, the Hollywood Reporter said Sony Pictures made up a mere 3.7 percent of the total domestic box office gross for 2015.

With movies like "Spectre",“The 5th Wave” and "Concussion" still set to premiere this year, Sony could turn things around but up to this point it’s been a really really bad year.

Taking the No. 2 spot this week is "The Intern," bringing in an estimated $18 million with a $40 million production budget.

Which isn't great, but is right in line with other releases from director Nancy Meyers. (Video via ScreenSlam)

Meyers' other films like "Something’s Gotta Give" and "It's Complicated" haven’t had large debuts but hold up very well at the box office.

As for the movie itself, turns out Robert De Niro is pretty good at playing the charming old guy despite the fact he’s spent most of his career playing anything but.

“I thought he was excellent, I thought they were both really excellent. … I thought this movie only worked when Robert De Niro and Anne Hathaway were talking to each other sort of growing that friendship,” Turner Classic's Ben Mankiewicz said.

That being said, there isn't much else to the movie. It's sweet, charming and as The Washington Post points out, "regrettably bland."

“Maze Runner: The Scorch Trials” holds onto a spot in the top three, but just barely — bringing in an estimated $14 million and beating out the expanded release of "Everest" by just $90,000 or so.

As for next week, the annual "Help! I'm lost in space!" film.