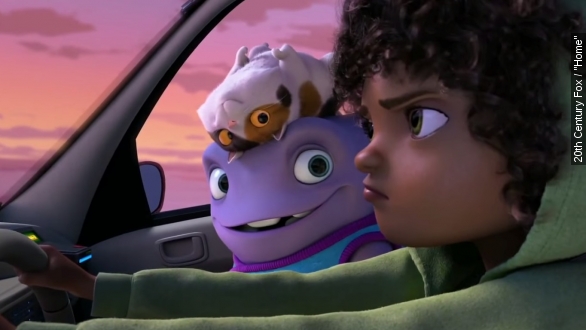 Buddy comedies from both ends of the spectrum topped the box office this weekend: an animated heartwarming tale of friendship starring Rihanna and Jim Parsons, and an incredibly raunchy romp with Will Ferrell and Kevin Hart.

Taking the top spot this week is "Home" with an impressive $54 million.

Rihanna stars as Tip, a girl trying to find her mother during an alien invasion with the help of Jim Parsons, who essentially plays his character from "The Big Bang Theory" — but as a cute, purple alien.

"Home" was a much needed win for Dreamworks after box office disappointments "Turbo" and "Mr. Peabody & Sherman."

And critics mostly agree that while "Home" doesn't do much to stand out from other animated features, it's definitely a fun film with a solid message for kids.

Next up, Will Farrell plays another egotistical moron and Kevin Hart is once again energetic and loud — but this time they're on the same screen.

Pulling in $34 million, "Get Hard" is already close to making back its $40 million budget, despite some pretty terrible reviews.

"Specifically, there was a courtyard moment where he really shined, and it was a lot of fun, and I laughed pretty hard, but the majority of it — meh," said YouTube reviewer MaximusBlack.

"This is movie is unconscionably lazy. Farrell and Hart are funny guys and they have been funny in a lot of movies. This just felt so strained and uninspired," said Alonso Duralde on a YouTube review.

Rounding out the third spot on the list is "Insurgent," a.k.a. the other "Hunger Games."

In its second weekend at the box office, "Insurgent" took in $22 million, pulling its total up to $86 million so far.

So it's not quite the financial powerhouse that other young adult novel adaptations have been, but this series has shown that the genre is like box office pizza: Even when it's bad, it's still pretty good.

Opening at the box office next week is "Furious 7." Yup, there are now seven of these movies.