Box Office Top 3: Governator Is No Match For Jurassic World 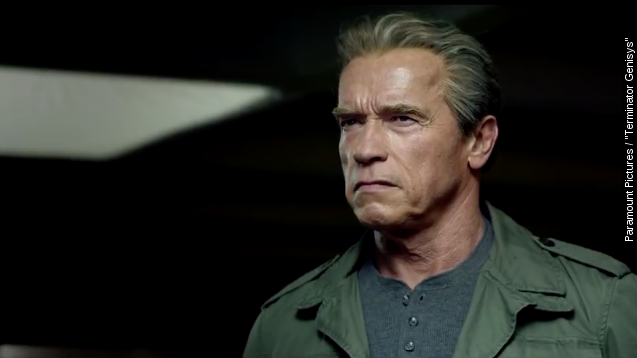 This weekend Arnold Schwarzenegger delivered on his most famous line, Channing Tatum humped a buzzsaw and they both still lost to dinos eating people.

It’s been four weeks since “Jurassic World” took hold of the box office and it has yet to loosen its grip. For the fourth week in a row Chris Pratt, Bryce Dallas Howard and their carnivorous co-star take the No. 1 spot bringing in an estimated $30.9 million.

With $558 million worth of domestic ticket sales Jurassic World moves to No. 4 on the all-time list taking fourth place from “The Dark Knight.”

With “Jurassic World” doing all this record breaking at the box office you might think Pixar’s “Inside Out” would be suffering but that hasn’t been the case at all.

“Inside Out” held off the Terminator and male strippers to take the No. 2 spot this week bringing in an estimated $30.1 million.

Since Inside Out debuted three weeks ago it has brought in $246 million domestically and $363 million worldwide.

And even though it’s been playing second fiddle to Spielberg’s dinosaurs, "Inside Out" is Pixar’s seventh highest grossing film ever after just three weeks. (Video via ScreenSlam)

"Terminator Genisys" rounds out third bringing in an estimated $28 million in in its opening weekend.

The $28 million total is the worst debut weekend in the franchise’s history besides the original "Terminator" which came out in 1984 and cost $6 million to produce.

Point being, the Governator’s return to the big screen was not needed or well received.

“There are some notable unanswered questions that feel like the filmmaker just said, Eh we’ll figure it out in the sequel.” IGN's Eric Goldman said.

"The time travel in the Austin Powers movie is tighter than this and that’s really disappointing." Rotten Tomatoes' Matt Atchity said.

Along with having a lackluster opening the Terminator’s fifth installment has received a collective thumbs down from critics. The Rotten Tomatoes score sits right at 27 percent.

The one saving grace for Khaleesi and California’s former Governor is the overseas crowd. The foreign box office total for “Terminator Genisys” nearly triples the domestic debut.

Oh and if you’re wondering, Magic Mike and his band of merry naked men did not make the top three.

As for next week: they’re cute, they’re yellow, and they seem to reproduce asexually.