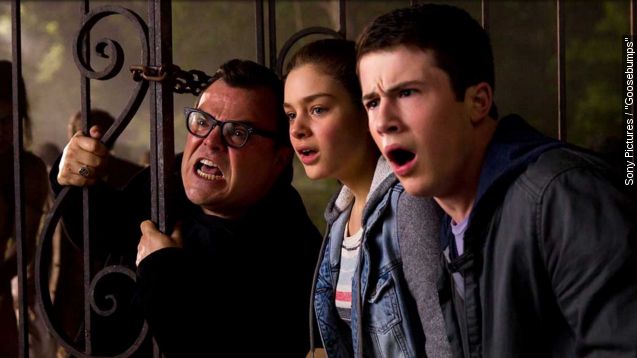 Not since the Teenage Mutant Ninja Turtles reboot has a movie studio so blatantly targeted me and my generation and I’m OK with that.

“Goosebumps” takes the No. 1 spot this weekend bringing in an estimated $23.5 million and satisfying your nostalgic needs.

While Sony isn’t breaking any records with a $23 million debut, “Goosebumps” is yet another family-friendly hit for the studio right on the heels of “Hotel Transylvania 2” which spent the last three weeks in the top three at the box office and has a worldwide total of $227 million.

Critically, “Goosebumps” seemingly satisfies both of its target audiences, providing thrills for kids and nostalgia for adults.

“Kids are gonna have a great time with this movie. It’s gonna be scary but not too scary for them. … Luckily their parents probably read “Goosebumps” when they were kids.” Jeremy Jahns  said.

“Each scene is taken seriously enough that I think kids are gonna get into it and I think adults (like ourselves) are actually gonna be able to fully enjoy this as a good old fashioned Halloween slumber party movie.” Crave’s William Bibbiani said on What the Flick?!

Which was essential for a movie like “Goosebumps.” R.L. Stine has been terrifying kids with his novels for 23 years, so those that are most familiar with his work are more likely to have kids than be kids. (Video via CNN)

Three weeks in, “The Martian” brought in an estimated $21.5 million during a very competitive weekend.

It’s also doing well abroad, managing $175 million overseas and it hasn’t even released in China yet.

Taking the third spot at the box office, is Spielberg's “Bridge of Spies” bringing in an estimated $15 million.

With Tom Hanks commanding the lead role and Steven Spielberg behind the lense, “Bridge of Spies” is sure to be 2016 Oscars bait. That hasn’t made it a box office success.

The film doesn’t rank in the top 15 openings for Hanks, and if you adjust for inflation it’s one of the worst debuts of Spielberg’s 40-year career.

That said, critically there’s been nothing but praise for the film.  TIME writes, “In his fourth pairing with Hanks, Spielberg again examines the furtive face of justice and issues another masterful ruling.”

As for next week, Vin Diesel trades in his Dodge Charger for a bow and arrow??