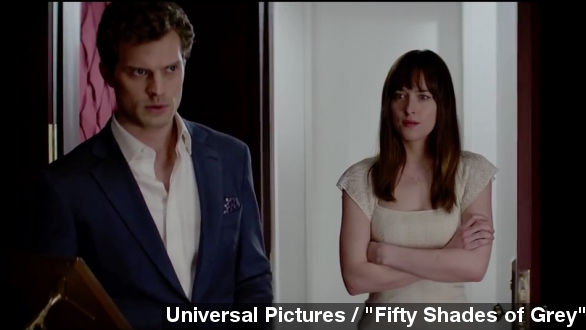 The book was a pop culture phenomenon, and it turns out the movie might be, too. "Fifty Shades of Grey," despite god-awful reviews, pulled in a record-breaking $81 million Valentine's Day weekend.

The $81 million weekend blows past every other Valentine's Day opening, beating the record holder "Valentine's Day" by more than $20 million. And with a $30 million haul on Friday alone, it also had the best box office opening day of any movie ever released in February. Who held the record before?

Yep, "The Passion of the Christ." Be proud, America.

Even for those who had no desire to see the "Fifty Shades of Grey," it was hard not to get swept up by the hype.

Between the controversy over who would bring Christian Grey to life, the question of chemistry on set and a weeklong series on the Today show, the film was constantly in the news.

Bottom line, "Fifty Shades of Grey" performed like a Marvel flick at the box office, inspired bondage bears, handcuff necklaces and a Wal-Mart gourmet gift basket all the while generating terrible reviews from critics. So in other words, it's just like the book.

And considering Focus Features broke even on the second day of release, I'm willing to bet Ms. Steele and company get roped into a sequel.

And now the movie you should have seen this weekend.

"Kingsman: The Secret Service" brought in an estimated $35 million and served as the saving grace for male moviegoers.

The James Bond-Austin Powers hybrid didn't break any box office records, but did pull in solid reviews and, frankly, did its job at the box office.

All credit for this great take on an overused concept goes to Matthew Vaughn, the director behind "X-Men: First Class" and the original "Kick-Ass."

As for all the moviegoers under 21: rounding out third place on this very adult weekend is "The SpongeBob Squarepants Movie," bringing in an estimated $30 million in its second weekend out.

As for next week, a Disney channel original movie.