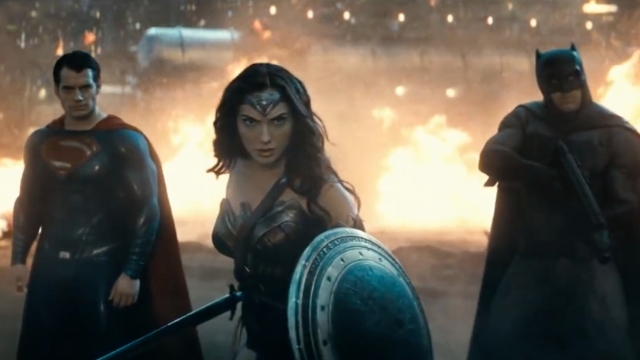 SMS
Box Office Top 3: 'Dawn Of Justice' Loses Momentum After Poor Reviews
By Jamal Andress
By Jamal Andress
April 3, 2016
"Zootopia" made the top three for the fifth week in a row, and although "Batman v Superman" was No. 1, ticket sales dropped significantly.
SHOW TRANSCRIPT

After breaking records in its debut, "Batman v Superman" has taken a serious hit in its second weekend. Looks like Rotten Tomatoes can make a difference after all.

Taking the No. 1 spot essentially by default, "Batman v Superman: Dawn of Justice" brought in an estimated $52 million. And while a $52 million weekend is impressive for most films, unfortunately, this is not most films.

Superhero movies tend to bet big with their budgets and deliver huge weekend numbers, which makes a 68 percent drop in ticket sales a fairly big deal.

The last comic book films to do this poorly in their second weekends were "Elektra" in 2005 and "X-Men Origins: Wolverine" in 2009. Both movies had particularly bad reviews.

Fortunately for Warner Bros., "Dawn of Justice" is performing much better overseas than in the states. After just two weekends in theaters, the foreign box office ticket sales are at $421 million.

"Zootopia" continues its streak at the box office, bringing in an estimated $20 million and spending its fifth consecutive week in the top three.

With almost $276 million at the domestic box office, this week "Zootopia" has pushed past "Shrek," "Monsters University" and a few others to take the 12th spot on the all-time animation box office list.

But it still has a way to go before "Frozen" lets go of its fourth place spot. "Frozen" is Walt Disney Animation studio's best performer in the past 10 years, and "Zootopia" is No. 2.

Taking the No. 3 spot this week is "My Big Fat Greek Wedding 2," which earned an estimated $11 million. That puts this sequel at a strong $54 million worldwide total.

The romantic comedy also beat both of the new releases this weekend. "God's Not Dead 2" and "Meet the Blacks" struggled in their respective openings.

As for next week, "Chronicle" meets "Call of Duty." Don't watch this if you're feeling queasy.

This video includes clips from 20th Century Fox and STX Entertainment and images from Getty Images.