Box Office Top 3: Cruise Can Still Pull Off The 'Impossible' 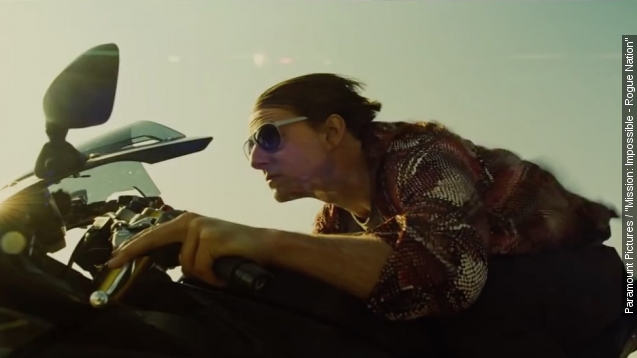 SMS
Box Office Top 3: Cruise Can Still Pull Off The 'Impossible'
By Jamal Andress
By Jamal Andress
August 2, 2015
"Mission: Impossible – Rogue Nation" takes the No. 1 spot this weekend with a $56 million domestic debut and another $65 million overseas.
SHOW TRANSCRIPT

Tom Cruise is 53 years old, worth $470 million and still doing his own stunts.

"Mission: Impossible - Rogue Nation" takes the No. 1 spot this week with a $56 million domestic debut and another $65 million overseas, making Rogue Nation’s grand total for the weekend $121 million.

The fifth installment of this nearly two decade long franchise missed the mark for the best box office domestic debut of the group by less than two million.

But $56 million is still good for the third best opening of Tom Cruise’s career, right behind “Mission Impossible II” and “War of the Worlds.” (Video via NBC / "The Tonight Show")

And man, does he deserve it. Tom Cruise has been chasing bad guys on motorcycles and beating up faceless henchman for more than 20 years. And yet, critics and audiences alike are still not sick of secret agent man Ethan Hunt. (Video via 20th Century Fox / "Knight and Day")

“I love the characters. Tom Cruise. Nothing more needs to be said. We all know this dude. What is he, 50?” YouTube film critic Jeremy Jahn's said.

“He gets off of a railing by doing crunches in mid-air. Who can do that?” LA Weekly's Amy Nicholson said.

And to prove it, the fifth Mission Impossible is boasting a 93% on Rotten Tomatoes.

And on the other end of the seesaw of success is a reboot no one asked for. "Vacation," the sequel or reboot to Chevy Chase’s 1980s road trip, brought in an estimated $14 million in its debut weekend, which is not impressive. Fortunately for Warner Bros., the road trip comedy wasn’t very expensive to make.

Nostalgia is a funny thing, it’s great when done correctly but can make people really angry otherwise. For example:

“Midway through 'Vacation,' the intrepid Griswold clan unwittingly takes a dip in a lake filled with human excrement, which is roughly how most viewers will feel after enduring 90-odd minutes of this miserably unfunny, mean-spirited and just plain wrong reboot.” Scott Foundas of Variety wrote.

National Lampoon’s original “Vacation” premiered in 1983, and back then the family road trip movie was an original idea. But since the Griswolds, moviegoers have hit the road with, the Johnsons, the Williams, the Cubes the Millers, and even Barbra Streisand.

So, standing out from the crowd is a much taller order now that it was in 1983.

In third place is the little superhero that could. “Ant-Man” brought in an estimated $12 million in its third week out.

As for next week, if at first you don't succeed try try again.