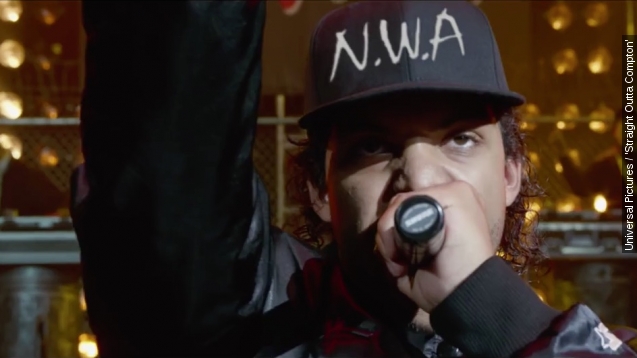 SMS
Box Office Top 3: 'Compton' Best Debut Of Any Music Biopic
By Jamal Andress
By Jamal Andress
August 16, 2015
With a $56 million debut, the N.W.A. biopic had the best opening weekend of any music biopic in box office history.
SHOW TRANSCRIPT

If you really want a successful movie in this day and age, you need three things: a great script, great actors and most importantly a viral meme.

“Straight Outta Compton” takes the No. 1 spot this weekend by a landslide, bringing in an estimated $56 million. That gives the N.W.A-story-turned-feature film the best debut for a music biopic ever.

“Straight Outta Compton” more than doubles the opening weekend totals for any other movie of its kind, the next closest being the Johnny Cash biopic, “Walk the Line.”

It’s also the best opening for a movie centered around hip-hop, rap or rappers beating out “8 Mile’s” opening by just over $5 million and “Notorious” by more than $30 million.

On top of all that, the film has been mostly a critical success – with many impressed by the performances on screen, and the film’s creators just impressed it’s on screen at all.

“Every time we went in the studio we just wanted to make music that was gonna rock our neighborhood, we wanted to be L.A. stars.” Dr Dre said in Billboard interview.

“We didn’t think the world would give a damn about gang banging and dope dealing in L.A.” Ice Cube added.

But the main complaint for this biopic is a familiar one – selective memory.

As Grantland’s Wesley Morris writes, “This is Behind the Music stuff that never goes far enough behind.”

“While Eazy-E died in the early '90s, Ice Cube and Dr. Dre still have major careers to protect. … The movie never puts them in situations where they come out as anything less than correct.” IGN's Brian Formo said.

That being said, “Straight Outta Compton” is definitely worth the movie ticket and with that we move to No. 2.

“Mission: Impossible - Rogue Nation” takes the No. 2 spot, bringing in an estimated $17 million in its third week out. Ethan Hunt and the gang remain in the top 3 despite another crowded weekend.

And at No. 3, Henry Cavill takes a break from being the real Superman to be a knockoff James Bond.

In its opening weekend, “The Man from U.N.C.L.E.” takes third place with a somewhat disappointing $13 million debut. Disappointing because it in no way competed with “Straight Outta Compton” for the top spot and because it cost $75 million to produce.

While the film isn’t bad by any means, critics have in large part given it a collective shrug.

And with five nationwide releases set to hit theaters before the end of August, three of which are action movies, “The Man from U.N.C.L.E.” runs the risk of being lost in the shuffle.

Okay, two of them are action movies one would be an action movie, but it stars Owen Wilson.

Speaking of actors stepping out of their comfort zones, next week it’s Jesse Eisenberg’s turn.