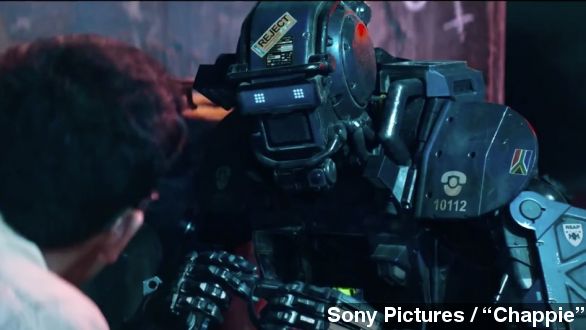 By Jamal Andress
March 8, 2015
Taking the No. 1 spot at the box office – though not in very impressive fashion – is sci-fi thriller "Chappie," bringing in an estimated $13 million.
SHOW TRANSCRIPT

Not many people went to the movies this weekend. But those who did probably saw Dev Patel in one film or another.

Taking the No. 1 spot at the box office – though not in very impressive fashion – is sci-fi thriller “Chappie,” bringing in an estimated $13 million.

Director Neill Blomkamp’s feature debut, “District 9,” managed to break even in its opening weekend while also boasting a 90 percent approval rating on Rotten Tomatoes. Blomkamp’s latest work did precisely the opposite.

Film critic Mark Ellis said, “Neill Blomkamp is a guy you rely on for some really great effects and some social commentary. We got some of one we got some of other but we got a really bad story.”

“Director Neill Blomkamp may be genuinely interested in artificial intelligence, but he doesn’t engage with it as much as desultorily kick it around.” a New York Times film critic said.

So while “Chappie” is charming and the film’s concept is novel, the story itself doesn’t deliver – but in an age where every other movie is a reboot, sequel or based on a novel, it’s nice to see Blomkamp still putting original ideas on screen.

Even though his next film will be (you guessed it) a reboot. Ah well, next!

“Focus” takes the No. 2 spot this weekend, bringing in an estimated $10 million in its second weekend out and, unfortunately for Will and the gang, it looks like the modern-day caper won’t be bringing in any major box office numbers domestically.

While bad weather nationwide was partly to blame for last week’s shaky performance at the box office, “Focus” had a significant drop off in week two. (Video via "Extra")

Thankfully for Warner Bros., “Focus” wasn’t an expensive movie to make, meaning it’s only about $15 million away from breaking even at the domestic box office, and the foreign box office is doing even better with a grand total of $37 million after one week.

And lastly, a new movie about old people.

Easy there grandma. “The Second Best Exotic Marigold Hotel” rounds out third place this week, bringing in an estimated $8.6 million and, aside from Dev Patel, it doesn’t star anyone under 60 years old.

Critically, this was the highlight of the weekend but not by much – it has a 64 percent approval rating on Rotten Tomatoes.

This movie franchise very clearly targets a certain audience, but as a writer for The Wall Street Journal puts it, “The [original] film appealed so strongly to its target audience that a sequel was inevitable.”

Inevitable and unnecessary according to some.

“This is the kind of sequel you point to when you talk about why sequels are terrible. … This is ‘Grown Ups 2’” film critic Christy Lemire said.

But it does seem to have the box office magic. The Fox film brought in $8.6 million despite only opening in 1,500 theaters – whereas films like “Chappie” and “Focus” opened in more than 3,000 theaters nationwide. (Video via 20th Century Fox / “The Best Exotic Marigold Hotel”)

As for next week, he’s back.