Box Office Top 3: Bond, Brown Get People Back In The Seats 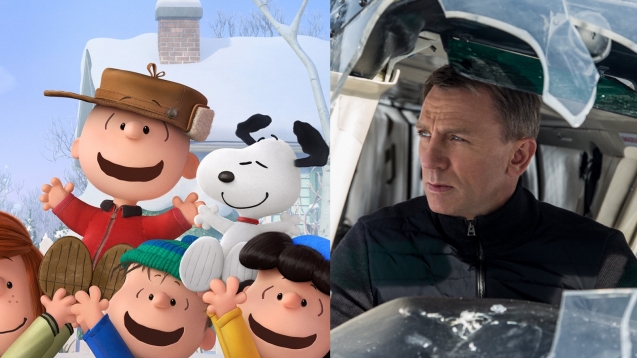 SMS
Box Office Top 3: Bond, Brown Get People Back In The Seats
By Steven Sparkman
By Steven Sparkman
November 8, 2015
It's been a tough few weeks for ticket sales, but "Spectre" and "The Peanuts Movie" finally got people back to the movie theater.
SHOW TRANSCRIPT

Well, after nearly a month of box office duds, James Bond is here to save the day.

No surprises here. "Spectre" brought in an estimated $73 million in its opening weekend, becoming the second highest-grossing film in the franchise behind "Skyfall."

What's a little more surprising is that no one seems to be all that excited about it.

"It never quite hits the high of predecessor 'Skyfall,' but 'Spectre' still delivers entertaining — if unspectacular — thrills," IGN's reviewer said.

"It's not terrible, it's just sort of eh. It's mid-level Bond, for sure," Alonso Duralde of What The Flick?! said.

The film's getting a lot of praise for its opening scene, for great directing, for fun action sequences and all the usual Bond stuff. But the general consensus is that it's just kind of missing something.

"Spectre" also went up against some stiff competition at the box office and from one of the few franchises that's even older than Bond.

It was like you could almost hear lifelong Peanuts fans breathe a sigh of relief. "The Peanuts Movie" is earning some critical praise and brought in an estimated $45 million in its debut weekend.

Ever since the first trailer showing a CGI Charlie Brown debuted more than a year and a half ago, those who grew up with Peanuts have been crossing their fingers that the filmmakers won't mishandle the beloved series. (Video via 20th Century Fox)

It looks like they weren't disappointed. The praise isn't unanimous, but "The Peanuts Move" has an 86-percent approval rating on Rotten Tomatoes, which is very good.

Together, Charlie Brown and James Bond also finally managed to bring some people back to the movie theater after a month of weak ticket sales. Speaking of which...

"The Martian," one of the few hits to come out of the October doldrums, held on to the No. 3 spot this weekend, bringing in an estimated $9.3 million.

As for next week, Antonio Banderas does drama in the dark.